General Info
Liverpool FC’s famous old stadium, Anfield, was recently redeveloped to make it the 6th largest football stadium in England without losing any of the feeling of its history. Having originally been the home of rivals Everton, Liverpool have been at this stadium since 1892 and have very much made it their spiritual home.

Anfield has been in operation as a football stadium since 1894 (only Everton playing there at first) making it one of the oldest in England but following many tweaks over the years stands as very much the home of a modern, European football giant. 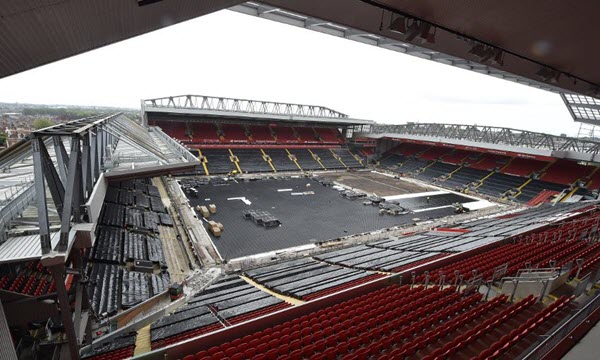 Part of keeping up with the times at Anfield has been the new pitch, laid in 2017. A new irrigation system, undersoil heating featuring 19 miles of pipes and other changes mean the pitch nowadays will not wear due to bad weather of any type.

The Anfield pitch is now made up of 97% natural grass and 3% artificial fibres which are effectively sewn into the sand and soil beneath the grass.

The new pitch at Anfield replaces what was a 15-year-old surface which could not recover so well from a long season of Premier League and European football. It can be watered entirely in three minutes meaning this job can be completed between the warm-up and kick-off.

The playing surface is 101 metres by 68 metres, pretty standard for Premier League football but slightly shorter than the pitches at Man City or Man United for example.

Capacity
Following the completion of the expansion of Anfield in September 2016, the ground can now hold 54,000 for home games.

Stands
Anfield is essentially made of up the Centenary Stand featuring the executive boxes, the Kop behind the goal, the Anfield Road Stand at the opposite end and the Main Stand featuring the players’ tunnel etc. Liverpool famously prefer to play towards the Kop in the second half of games.

Away Fans At Anfield
Visiting supporters are houses within the Anfield Road Stand, opposite the Kop. Two relatively small tiers make up the away section with the standard allocation being only around 2,000. Anfield is unfortunately famous among away fans for restricted views in this area.

Hospitality
The Red’s hospitality packages are offered in the 1892 Lounge, The Boot Room Restaurant, The Chemistry Lounge and others with prices in most areas starting at £174 per person.

How To Get To Anfield
Anfield is around 2 miles north of Liverpool city centre and can be seen from rivals Everton’s Goodison Park home on the other side of Stanley Park.

Buses are available to near the stadium from Queens Square bus station, close to Liverpool Lime Street Station where trains will arrive into the city.
Drivers from the north should take the M57, come off at junction 4 towards Liverpool. Following signs for the city, head for Queens Drive, or the A5058, keeping an eye out for the stadium. From the South or East simply head for the city from the M62 until reaching the same A5058 (Queens Drive).

Future Developments
Before the most recent development of the ground, plans were afoot to replace Anfield with a new 61,000-seat stadium. These plans appear to have been shelved, for now at least.