General Info
The bet365 Stadium (formerly the Britannia Stadium) has been the home of Stoke City since 1997 with the Potters having played for 119 years at former home the Victoria Ground. Ground was broken in late 1996 and was completed in the summer of ’97 at a cost of £15million. 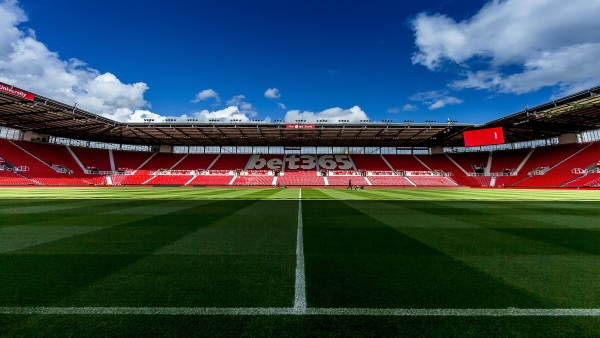 As if to show how far Stoke City have come since moving into their new home, the first visitors to the now bet365 Stadium were Rochdale who went away with a 1-1 draw in the League Cup with only 15,439 in attendance.

Just under 24,000 however were in to watch the side play Swindon Town in the league a few days later announcing a new era for the club. Unfortunately the team lost 2-1 to the Robins although better things were to come in the next few years.

Having previously been owned partly by Stoke-on-Trent Council and Stoke-on-Trent Regeneration Limited, the club as of 2017 now wholly owns the stadium having paid an extra £6million to complete the deal.

The playing surface at Stoke is made up of both synthetic fibers and natural grass and measures the standard 105 meters by 68 meters. Under-soil heating is utilised too.

The stadium is famous within the game for the swirling wind which tends to make playing conditions difficult, something often managed better by the home side for obvious reasons.

Capacity
Just over 30,000 fans can pack into the bet365 on match day with no current firm plans to increase this.

Stands
The bet365 Stadium is made up primarily of the Sentinel East Stand and the West Stand which line the pitch, with the South Stand and Boothen End (North) Stand behind each goal.

Away Fans At The Bet365
Traveling fans at the bet365 are situated in the Marstons Pedigree Stand behind goal at the south end of the stadium. Away supporters share this part of the ground with the home support making for a good atmosphere with the standard Premier League allocation being around 2,800. Views are unobstructed and feedback from visitors is generally favorable.

Ticket Prices
Premier League match prices are split between Category B, Category A and Category A* games depending on the level of opposition and the dates etc.

Hospitality
Matchday hospitality prices can be found on direct request to the club, though guests are given a choice of various lounges and suites all offering first class food and drink as well as great views of the action.

The Chairman’s Suite, Tony Waddington Suite, Stanley Matthews Lounge, 1863 Lounge and Executive Boxes are all offered up to interested parties.

How To Get To The Bet365 Stadium
Traveling by road from the north, south or west take the M6 motorway and leave at junction 15 onto the A500. Head for the A50 and then follow signs for the stadium.

Stoke-on-Trent railway station is only around 2½ miles from the stadium and being on the West Coast Mainline is served directly from Birmingham, Derby, London and Manchester. Supporters can catch a match day shuttle bus from Glebe Street in Stoke directly to the stadium.

Future Developments
With a new 1,800-seat stand filling the south east corner of the stadium completed in 2017, there are no further plans for redevelopment given the club’s current plight.