General Info
Bramall Lane is the home of Sheffield United Football Club and is one of two top level football stadiums in the city along with Wednesday’s home, Hillsborough. United have played here since their establishment in 1889 and it is the world’s oldest major stadium to still be hosting professional matches today.

The road which gives the stadium its name was named after the Bramall family and beside it was built what was initially a cricket ground. It was used for football games towards the end of the 19th century with Sheffield FC and Sheffield Wednesday having also played here. 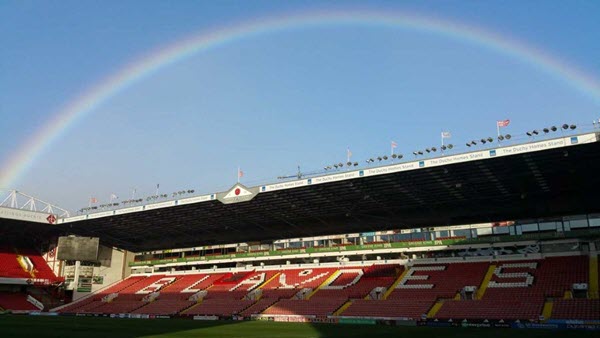 The Lane was used for international matches before England had a national stadium as such and the world’s first ever floodlit game took place at Bramall Lane in 1878 in front of 20,000 people. When England played Scotland at Bramall Lane in 1883 it was the first match between the two nations played outside of either Glasgow or London.

Undersoil heating is deployed at Bramall Lane to ensure games are not called off specifically because of a frozen pitch, though arguably the heating helps the grass to grow between games as well.

The heating churns away beneath a playing surface made up partly of synthetic fibres, as is the modern way, and mostly of natural grass. The pitch itself is measured at 102 metres by 66 metres which in fact is a little smaller than most modern, top level English pitches.

Capacity
Currently, 32,700 is the capacity at Bramall Lane but this could rise to around 37,000 should further modernisation occur.

Stands
The modern names for the stands at Bramall Lane are; the Malta Family Stand (running along the length of the pitch at the John Street side of the ground) and opposite is the Gac Stand. Behind each goal stands the Kop and the Halliwells Stand (Bramall Lane Stand) with two of the corners of the ground filled in.

Away Fans At Bramall Lane
Visiting fans at Bramall Lane tend to be housed in the Bramall Lane Stand behind the goal at the western side of the stadium. Usually, away fans are given a 3,000-strong allocation though this can change for cup games.

Unlike at the opposite end of the ground, the away fans in the upper tier of the Bramall Lane Stand have unrestricted views and no beams. Feedback from visitors is generally favourable and the atmosphere described as good.

Ticket Prices
Typical single adult matchday tickets cost from £22 – £34 for a home Championship match at Bramall Lane, though pricing is categorised and staggered as normal. Concessions are available for older, younger and disabled fans and cup games are priced individually.

Hospitality
Guests on matchday can book packages in the 1855 Restaurant, the Director’s Box, the TC10 Restaurant, the Platinum Suite and the 125 Room from £75 to £150 per person, per game plus VAT.

How To Get To Bramall Lane
Bramall Lane sits south of Sheffield city centre, around a mile away, and only a 15-minute walk from Sheffield’s main train station which is connected with London St Pancras as well as Manchester, Leeds and Birmingham.

Drivers should follow signs for Sheffield city centre before heading for Highfield and then looking out for signs for Bramall Lane.

Future Developments
The Blades have planned a redevelopment of the South Stand at Bramall Lane with proposals seeking to add more than 5,000 new seats as well as executive boxes and a new media centre.