General Info
Norwich City FC have been playing their football at Carrow Road since 1935 after the stadium was purpose built for them in just 82 days. Before that the Canaries played their games at Newmarket Road and then The Nest. Carrow Road is positioned nicely within the NR1 postcode and very close to the main train station and the River Wensum.

Naturally the stadium has been modified several times to keep up with the times but never more dramatically than following a fire which destroyed the City Stand in 1984. 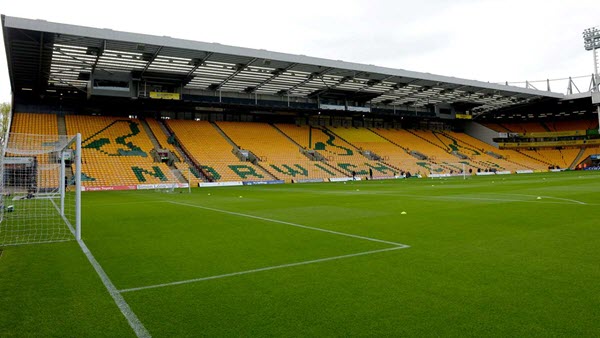 Although crowds are smaller these days, Carrow Road once attracted just under 44,000 people for an FA Cup match against Leicester City back in 1963, though the modern all-seater record is 27,137 against Newcastle United in the Premier League in 2016.

The playing surface at Carrow Road is a modern mixture of natural grass mixed with some synthetic fibres. This gives a good appearance and keeps the pitch in good condition, as does the undersoil heating system which is in effect. The playing area itself measures a fairly standard 104 metres by 68 metres.

Capacity
Just over 27,200 can be seated within Carrow Road for home league matches these days, though that includes varied amounts of seating in corporate areas.

Stands
Running along the length of the pitch are the Jarrold Stand and the Geoffrey Watling Stand. The former houses the main reception to the stadium. Behind each goal are the Norwich and Peterborough Stand and the Barclay Stand. The Jarrold Stand on the eastern side of the ground is the largest of the individual structures, the corner of which with the Barclay Stand is the only one of the four not fully filled in.

Away Fans At Carrow Road
Away supporters at Carrow Road are situated in the Jarrold Stand. This is a large stand and so given the 2,500 standard allocation it means the structure is shared with home fans.

The stand is modern and was opened fully in February 2004 and given this fact it’s no surprise that the views are excellent and the seats and facilities are generally given very positive feedback by travelling supporters.

Ticket Prices
Typical single adult matchday tickets for a Championship game at Norwich run from £20 to £45, though tickets for various lounges with a more private bar and facilities run from £30 to £50.

Hospitality
Hospitality and sponsorship packages at Carrow Road are available in a number of suites and boxes ranging from £100 plus VAT per person, per game, right up to £2,250 for multiples guests.
All packages include food and drink, a comfortable seat with an excellent view as well as half-time refreshments and other perks.

How To Get To Carrow Road
Carrow Road is only 1¼ miles from the centre of Norwich and just a 25-minute walk. The main train station is Norwich is barely half a mile from the stadium and takes only 10 minutes to walk to. There are plenty of direct trains into Norwich.

Those wishing to drive to the stadium can take the A11 road into the city and simply follow signs for ‘Football Traffic’. Various bus routes from around the area serve Carrow Road and the train station nearby.

Future Developments
No firm plans exist to significantly modernise, extend or redevelop Carrow Road at the moment. A sustained run in the Premier League for the East Anglian club could change that however.