General Info
Nottingham Forest moved into a new ground in September 1898, a full 33 year after their formation, in what seemed like a new dawn at the City Ground. This though has been the home of the Tricky Trees ever since and the stadium remains one of the game’s most iconic locations.

The City Ground was used as a venue for the European Championships when hosted by England in 1996. Another claim to fame is the fact it stands just a few hundred yards from the home of Meadow Lane (Notts County), making them the closest professional stadiums in England ahead of Liverpool/Everton and the second closest in the UK behind those in Dundee. 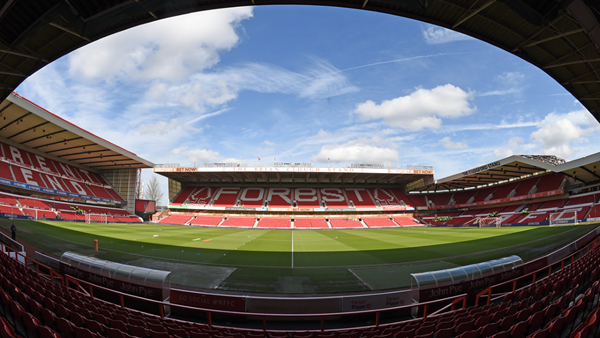 The pitch at the City Ground is purely made up of natural grass and is served by undersoil heating, a crucial tool in the winter months to guard against losing games to frozen pitches. The playing area is measured at 105 metres by 71 metres – standard length but a little wider than most pitches at this level.

Capacity
Just over 30,500 is the current capacity of the City Ground and this is something unlikely to change in the near future.

Away Fans At The City Ground
Visiting fans at Nottingham Forest tend to be housed in the lower tier of the Bridgford End, a section which is capable of seating around 1,000 fans. On occasion when demand is high enough, away fans are given the upper tier of the stand as well.

Views are generally good and the facilities are seen as adequate, though this remains one of the grounds where away fans have reported unsavoury behaviour including home supporters throwing objects and stewards being rather quick to throw away fans out of the stadium for minor “misdemeanours”.

Ticket Prices
Prices are not staggered at Forest and are typically available for £23 for a single adult to see a standard Championship game. Concessions are available while heavy discounts are in place for junior supporters and the disabled.

Hospitality
A range of hospitality packages are available at the City Ground including a seat in the Castle Club at £50 per person, per game. The Robin Hood Suite is available at £60 as is the 1865 club while there is a VIP package at £130. Executive Boxes will cost £700 per person. All prices are exclusive of VAT.

How To Get To The City Ground
Located right on the banks of the River Trent and well within view of the city’s other football stadium at Meadow Lane, the City Ground is only 1½ miles from the main train station and just a couple of miles from Market Square.

As well as being close to Notts County’s Meadow Lane, the City Ground is also right over the road from Trent Bridge Cricket Ground and so many buses serve this area from all around the city and take only around 10 minutes from the city centre.

Future Developments
No plans exist to significantly extend, redevelop or modernise the City Ground although some fans want a new stadium to be on the agenda at the club.