General Info
Craven Cottage is home to Fulham FC and has been since 1896 though the original cottage, now a feature at the stadium, was erected in 1780. The stadium stands next to Bishop’s Park, right on the banks of the River Thames.

The football club came across the land in 1894 but it was overgrown and took two years to make it suitable for playing football. The first match was played on the site in October 1896 and it has been home to the Cottagers ever since. 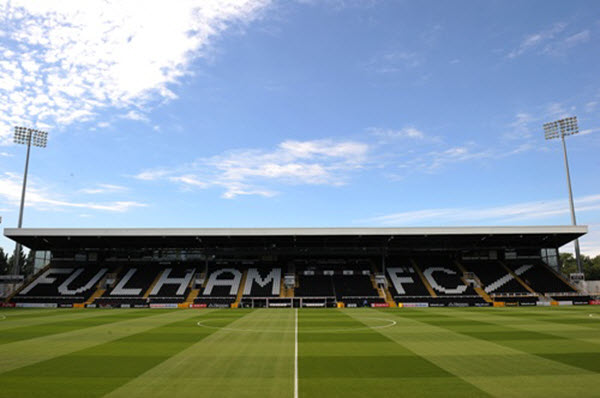 These days undersoil heating exists beneath what is a playing field made up of Fibrelastic grass, a natural turf pitch which claims to offer less risk of injury to players and in this case is a rather tight 100 metres by 65 metres.

Capacity
Currently Fulham can host 25,700 people on matchday though there are plans to increase this ever so slightly.

Stands
Craven Cottage is made up of the Johnny Haynes Stand and the Riverside Stand which run the length of the field, while behind each goal are the Hammersmith End and the Putney End.

Away Fans At Craven Cottage
Away fans at Fulham are situated in the Putney End Stand behind one of the goals with a standard allocation for visiting supporters of 3,000 which means taking up around half of the stand. Still a well-meaning but concerning policy for the modern game, the remaining half of the stand is open to neutral supporters.

The only negative reported by away fans are the beams, given that the stadium is old, meaning slightly restricted views at times. The old charm of the stadium, the close proximity to the pitch and the noise levels though are still good features.

Ticket Prices
Tickets for a category A game at Craven Cottage run from £35 to £45 per single adult, though concessions are offered also. These change to £30 to £45 for category B and £25 to £40 for category C.

Hospitality
Hospitality guests have a range of areas and packages to choose from around Craven Cottage and all are competitively priced given the club’s location. McBrides, a bar within the stadium, offers a matchday package for £99 per person, per game plus VAT while the Clubhouse is £99.
Moving up the scale; the Seasons Wine Lounge is available for £159 per person plus VAT while the Executive Suite offers a package for 10 guests at £1,849, again plus tax.

How To Get To Craven Cottage
Driving to the Cottage is not recommended. Parking restrictions apply and is nigh impossible on matchdays, though there are simpler ways to get there.

The stadium sits in the Hammersmith and Fulham borough, west London and is only around 5 miles from most of the city’s well-known landmarks and as such has excellent train rail links. Taking the District Line on the Tube will bring you to Putney Bridge station and from there the stadium is only a 10-minute walk.

Hammersmith station is served by the Circle, District, Hammersmith and City and the Piccadilly lines though is a little further away from the ground, around a 20-minute walk.

Future Developments
Permission has been sought by Fulham to redevelop Craven Cottage in the very near future. The redevelopment and expansion plan would seek to increase the capacity of the Riverside Stand to 8,650 from 4,689 and bring the overall capacity to a little over 29,500.

Along with this would come a new river wall right on the Thames, new restaurants, bars, hospitality areas and event space as well as a new public riverside walk. The plans look dynamic and would be very welcome in keeping a traditional stadium in play though modernising and expanding as is necessary.