Fratton Park has an all seated capacity of just over 20,000 and has been Portsmouth’s home since 1899. The most dedicated and passionate of the fans will be found in the Fratton End, the stand that is located behind one of the goals. It is the only stand in the whole stadium that guarantees you an unobstructed view of the game as there are no pillars in the way of your view. This cannot be said for the other stands with many blocked views in the North and South Stands as they are much older. However, views from the Milton End are generally okay and only a couple of the seats will have a blocked view. 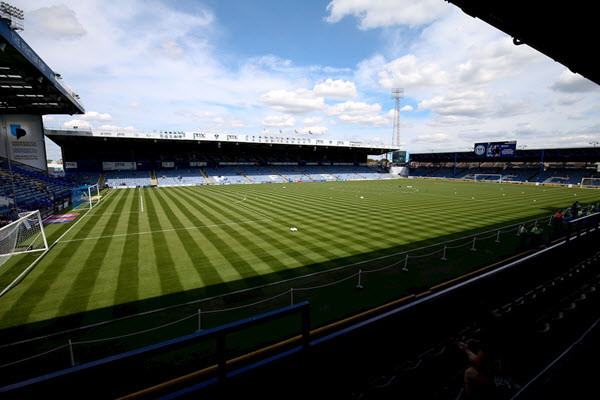 The Fratton End is a modern single tiered stand that was built in time for the 97-98 season. It is a great sized stand and is the biggest inside the stadium. The seats in this stand are different colours to outline a portrait of Portsmouth legend, Jimmy Dickinson who is still the record holder for most appearances for the club.

Opposite this stand you will find the Milton End which as mentioned previously is now an all-seater stand. You can also find a few away fans in this stand on match day. The ground also has the proud honour of having the largest set of floodlights in English football and these were first issued at the beginning of the 1962-63 season, meaning they are now over 50 years old.

The away supporters are located in the north side of the Milton End, opposite the die-hard Fratton End. Making for a very lively atmosphere between the two sets of opposing fans.

Away Fans At Fratton Park Stadium

There is normally around 2,100 fans that can be situated in this stand and they are now able to make a lot more noise than they were previously able to, this in no part down to the newly constructed roof. Away fans generally get a very good view of the action- while some seats do have a little bit of blockage. The leg room is again tight in the travelling areas but food and drinks are well priced and the facilities are no worse than you would expect at a football stadium.

How To Get To Fratton Park Stadium

There is parking is all along nearby roads with the best spots being on the A2030. If you arrive early enough you’ll get a space near to the ground and an easy get away following full time. Even if you’re only getting to the area about half an hour before kick-off you’ll still have time to find a space and make the walk into the stadium.

There are also various local places that offer secure parking on match-days with a £5 fee but some of these are a little trickier to get out of after the game with other cars blocking your way out.

The nearest station to the stadium is Fratton. You will easily find the stadium, when exiting the train station simply follows the signs for Fratton Park, if you somehow get lost you can follow the crowds as many fans use the train as the easiest way to get to the stadium for matches.
There is no difference in pricing of tickets between the stands. Adults will pay £23, over 63’2 will be charged £17, while under 23’s pay £15 and under 18’s will pay £5 if accompanied by an adult or £10 if they are not accompanied by an adult.