General Info
The Liberty Stadium in Swansea was built from scratch to be a multi-purpose venue, conferencing and events being as important to its revenue streams as the rugby and especially football teams that it is famous for.

The Liberty Stadium is home to both the Ospreys rugby union team and Swansea City Football Club and is the third largest stadium in Wales after the Cardiff City Stadium and the Principality Stadium, also in Cardiff. 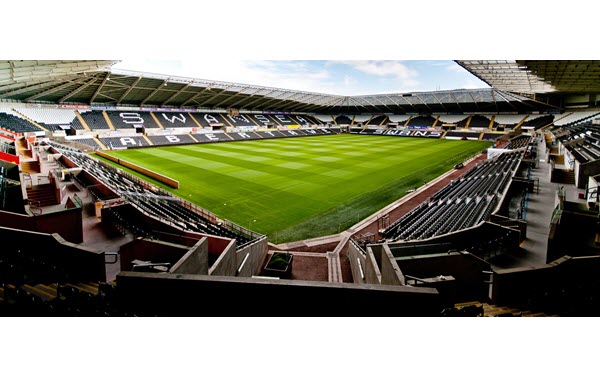 The stadium opened for business on the 10th of July 2005 and replaced Vetch Field as the home of the Swans. The construction cost of just £27million is remarkable in today’s market, especially given the favourable reviews the stadium receives from visiting fans regarding views and facilities.

As is the case with a lot of modern top flight clubs, Swansea have opted for a pitch made up of not just natural grass but also some synthetic fibres which are woven through under the pitch’s surface.

Undersoil heating is utilised to ward off cold weather while the playing surface itself measures a Premier League standard 105 metres by 68 metres and always looks in top class condition for matches.

Capacity
Currently just under 21,100 can fit into the Liberty Stadium for football matches, though directors are exploring the demand for further development of the ground.

Away Fans At The Liberty Stadium
Opposing supporters at the Liberty are situated in the North Stand behind one of the goals. The usual allocation of Premier League away tickets here is 2,000, though that may increase after ground expansion. Views are excellent from everywhere within the away section.

Ticket Prices
Prices vary depending on the competition and the opposition at the Liberty, though £18 – £36 for an adult at a Premier League fixture is about standard.

Other options can be explored including the Executive Suites, The ’81 Club and the ‘Dine with Directors’ option. All lounges and suites serve the best food and drink and offer superb views of the action.

The area is well served by several bus routes with most leaving from the train station in the city on what is only a 5-10 minute journey.

Drivers coming to Swansea City can take junction 45 from the M4 motorway and follow the signs on the A4067 to Swansea. Upon arriving within the limits of the city, signage will prompt you towards the Liberty Stadium.

Future Developments
With Swansea City Football Club having now taken control of the stadium from the local council, expansion plans are something the club could look at if the demand is there.

The club are looking into demand for seats and hospitality and a new naming rights partner could be found to partly finance any expansion.