Peterborough United’s London Road is called by many a traditional ‘old’ football ground. The official capacity of the stadium is around 14,300. There is terracing at one end of the pitch behind the goal and a new all seated stand behind the other goal at the other end. 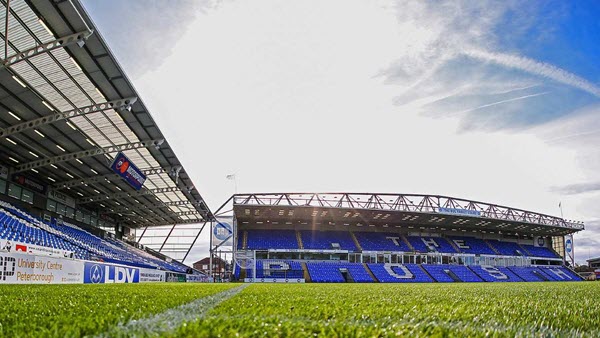 The Norwich and Peterborough stand runs for the length of the pitch and can house around 5,000 fans on match day. Opposite this stand you will find the old main stand which unfortunately does have pillars and may restrict your view if your seats are here.

The Norwich & Peterborough South Stand was opened in 1996 and replaced an old terraced part of the stadium. The two-tiered stand is covered and as is the way with all newer stands, it is an all seater.

Furthermore, there is a row of executive boxes running across its middle to the clubs directors and owners. On the other side you will find the Main Stand, it is a much older stand, as it first opened in 1957.

Like the before mentioned stand, it is also two-tiered, it also covers the stand and is all seated so spectators do not get wet during matches. Meanwhile, the other stand is called the London Road Terrace. This covered terrace has a bright white roof and is a vintage looking old stand, with the rood added in the 1950’s. As expected because of its age, there are pillars running across it so your view may be impaired.

The Motorpoint Stand is a new single tier all seated stand which was opened in November 2014, it has a maximum capacity of 2,500. This newly developed stand replaced a stand that looked identical to the London Road End.

You will find the away fans in the Main Stand, here there is a maximum capacity of 1,800 travelling fans. There is a great view from the seats but some away fans have shown their frustrations of the quality of facilities. If you are towards the back row, you will most likely be sitting on a wooden chair and don’t expect to be comfy with limited leg room for all seats.

How To Get To The London Road Stadium

Be aware there is currently no parking at the stadium site; this is down to the ground redevelopment which has been going on for at least five years now. However, if driving is the way you plan to attend, there is parking places opposite the stadium. There is also further spaces on streets, but be aware you will have to get there early to get a good spot.

The nearest train station to Peterborough United’s London Road Stadium is Peterborough. The railway station is around a 10-15 minute walk away. If you follow the signs when exiting the station you will find that the ground is on the left-hand side when you arrive.