General Info
Molineux Stadium, home to Wolverhampton Wanderers since way back in 1889, holds a few bragging rights such as the being the first stadium to be built by the Football League and being one of the very first to install floodlight in order to host football games in the hours of darkness. 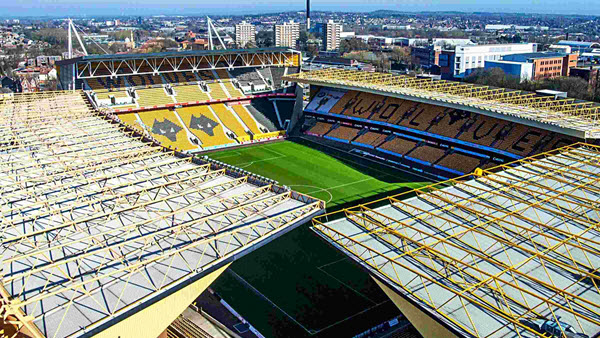 Local merchant Benjamin Molineux purchased land in 1744 on which a hotel and eventually Wolves’ stadium was built and that is where the famous old ground gets its name.

Undersoil heating is utilised beneath a playing surface that is made up of a mixture of natural grass and synthetic fibres. The pitch measures 100 metres by 64 metres, rather on the small side for a top level club.

Capacity
Having been developed to some degree during Wolves’ last season in the Premier League, Molineux currently holds a maximum 31,700 for home league games.

Away Fans At Molineux
Visiting supporters at Molineux are housed generally in the Steve Bull Stand, though for larger allocations the lower Stan Cullis corner is also used bringing the total away congregation to around 4,500.
Given the lack of beams for an older stadium meaning unfettered views of the action, away fans generally give Molineux a good review and all supporters are looked after to the same standard on the concourses in terms of food and drink.

Ticket Prices
Tickets for a typical Championship match at Molineux for a single adult tend to be around £25 – £30, though concessions for younger supporters and pensioners are offered on all general sale tickets.

Hospitality
Those looking to watch Wolves in a bit of style can take advantage of hospitality packages in the WV1 Restaurant, WV1 Bar, President’s Lounge, Steve Bull Executive Box, International Restaurant or the WV1 Quadrant.

Drivers heading to the stadium from the north should use the M6 or the A38, follow the signs for Wolverhampton and then for Molineux Stadium. From the south take the A449 before following the same signs.

Future Developments
The club have had long standing plans to expand Molineux but since 2010 those plans have been pretty much on hold. Those plans involved taking the ground up to a capacity of 37,000 but having stalled on those due to relegation from the Premier League, Wolves may be thinking even bigger.
With a bright future predicted for the club in England’s top flight, new plans have been drawn up which could take Molineux up to a capacity of 41,000 in the near future.