General Info
Old Trafford, home of course to Manchester United, was nicknamed the Theatre of Dreams by Bobby Charlton and it’s a name that has stuck over the years.

The stadium has been the home ground of Man United since 1910, although they did share Maine Road with Man City for 8 years in the 40’s after bomb damage to Old Trafford during the Second World War, and has undergone several expansion schemes in more recent times including the addition of extra seating in the North, West and East Stands. 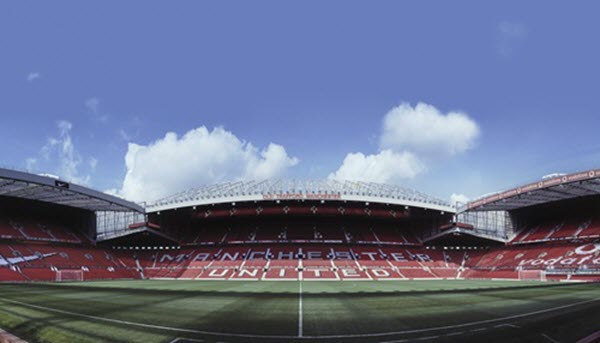 The Red Devils’ pitch has an undersoil heating system some 10 inches under the surface made up of plastic piping while the pitch itself is around nine inches higher in the centre than at the edges to allow surface water to run off more easily.

The pitch measures around 105 metres by 68 metres and is made up of natural grass and some synthetic fibres, something installed in 2013 and seen as essential after various demands by former manager Sir Alex Ferguson to relay the surface after its various collapses had causes concern. The relaying cost the club £250,000 each time.

Capacity
The stadium these days holds just under 75,000 which makes it the largest club stadium in England and second largest overall behind national stadium, Wembley which can accommodate up to 90,000 people.

Stands
Old Trafford is made up of the Sir Alex Ferguson Stand, formerly the North Stand and the largest area of the ground, the Sir Bobby Charlton Stand (formerly the South Stand) as well as the East and West Stands.

The East and West Stands are behind each goal while the Sir Alex Ferguson and Sir Bobby Charlton stands run the length of the pitch and house the majority of hospitality guests, players and media.

Away Fans At Old Trafford
Visiting supporters at the stadium are sat in the adjoining sections of the East and South Stands. The typical ticket allocation is around 3,000, fairly standard for travelling Premier League teams although not all visiting teams take up the full allocation.

Ticket Prices
Typical Premier League ticket prices at Old Trafford run from £37 in upper tiers to £53 in the Upper Wings of the Sir Alex Ferguson Stand. Those same seats can be bought for only £17 – £23 for concessions while 17 and 18 year olds also receive a discount.

How To Get To Old Trafford
A special train service is provided on matchdays from Manchester city centre to Old Trafford Stadium Station, although a Metrolink service also runs to the area from Piccadilly Station to Old Trafford which is around a 5 minute walk to the stadium.

The stadium is just two miles away from the city centre and is accessible by road. Drivers should take the M60 motorway, take junction 7/8, head onto Chester Road and look for Sir Matt Busby Way.

Future Developments
Plans are in place to expand the stadium even more involving a second tier on the South Stand which could eventually take the capacity at Old Trafford to 88,000. This further development may depend on the success or otherwise of the team with neighbouring Manchester City intending to take over as the biggest club in the country.