Priestfield stadium has been home to Gillingham FC since the club’s formation in 1893. Gillingham were originally founded as New Brompton FC, the founders were able to purchase a plot of land after issuing over 1,000 shares at a price of £1.00 each. 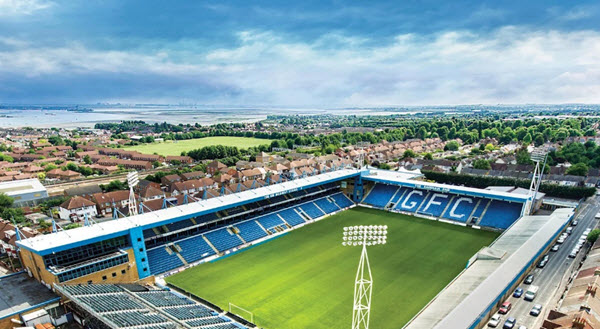 The first adjustments of Priestfield simply consisted of freshly laid grass and a pavilion, which fans would typically use after or before the game to mingle with each other and the players.

In 1955, the pitch was finally levelled after years of playing on an uneven surface and Priestfield received a new terrace on Gordon Road. Floodlights were added in 1963 and by the mid 1980s the ground’s capacity had reached 22,000. However, the capacity was to drop following the disasters in Sheffield and Bradford, meaning that the actual capacity was nearer to 10,000.

Spearheaded by the club’s new owner Paul Scally in 1995, the club undertook an extensive redevelopment of Priestfield. The ground became an all-seated venue, with a new Gordgon Road Stand in 1997, Rainham End in 1999 and new main stand in 2000.

The main stand is two-tiered, with a large lower tier and a small upper tier. Here you will also find the executive boxes, which also have outside seating. Opposite is the Gordon Road Stand. This is a much smaller section and was opened in 1997.

The Brian Moore Stand is where the away fans are housed here; around 1,500 supporters can be accommodated. However, like last season the stand is a temporary one. Away tickets for adults cost £20, while under 18’s tickets cost £5.

As for the home fans, it is dependent on where you sit with how much the price will be. Adult tickets costing £25 will get you a seat in the Medway Stand- lower tier in the center or the Gordon Road Stand- either center or on the wings.

However, you can opt to pay £22 which will get you a seat in the lower wings or upper tier in the Medway Stand or a seat in the Rainham End. All under 18’s tickets cost £7 with no designated area for this price.

The fastest way for many visiting supporters travelling to the Priestfield Stadium will be on Southeastern’s High Speed service from St Pancras, taking around 40 minutes. However, because it is Southeastern’s flagship service, tickets cost more than those to Gillingham from other London terminals.

When a full service is running, four trains per hour depart from London Victoria, with the general travel time around 50 minutes.

It is currently an exciting time in Gillingham’s history as the Club have recently re-announced their desire to move to a new stadium. Land near to the Club’s Beeching’s Cross training ground has been suggested as a possible new stadium site.

The scheme which is being referred to as the Medway Village is dependent on obtaining a retail partner to provide finance into the scheme, plus getting the agreement of Medway Council.