While the stadium is commonly known throughout the game as Valley Parade, its official title is the Northern Commercials Stadium following a welcome sponsorship agreement.

Bradford City, who was formed in 1903 when Manningham decided to switch from rugby to football, developed so rapidly that they gained promotion from the old First Division five years later and the Directors hurriedly constructed a ground to cope with the large crowds. 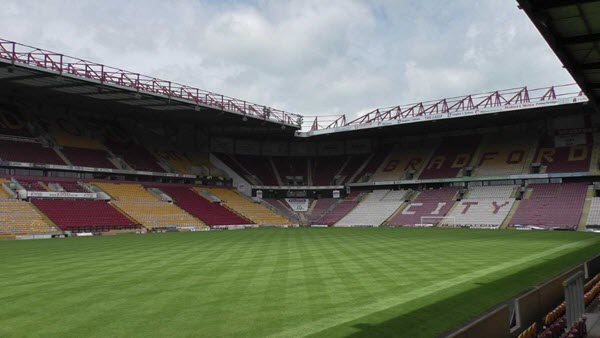 The club faced a similar problem in 1999 when they gained promotion to the Premiership and decided to add a second tier to the main stand, giving Valley Parade a 25,000 all-seater capacity to cope with the attraction of football’s elite.

Following the Bradford City Fire on 11 May 1985 (left), Valley Parade laid derelict for 12 months while a decision on its future was taken, although Reserve Team games were played there with crowds of just a few hundred gathered under the shed at the Bradford End.

In the meantime the Bantams played their games at Leeds United, Huddersfield Town and Odsal Stadium and it was thought that Bradford Council, who owned Odsal, would have liked City to abandon Valley Parade and share the stadium with Bradford Northern (now Bradford Bulls).

The extensive ground redevelopment spread over 5 years, following the clubs relegation from the Premier League in the 1999/00 gave the club a 25,000 capacity stadium.

Away Fans At Valley Parade

The TL Dallas Stand at one end of the ground is where you will find the away fans; here 1,840 fans can be at the game. The upper tier is the best place to sit with a great birds-eye view of the game available, not missing any tactical change from the managers.

Tickets for all areas of the ground start from £20 for adults, while students and over 65’s pay £15, under 16’s are charged £10 and under 11’s cost £5. This makes the club one of the only teams in the football league that sell tickets in all stands as the same price. You can also get hospitality treatment in Bradford’s new Legends Suite, you don’t just get to experience the 90 minutes of football, and you will also receive the combination of superb facilities, excellent cuisine and first class service. If youy are a life-long Bradford fan, this would be great as you will get to mingle with ex-players and they would be more than happy to answer any questions you may have. You can then watch all the on-field action from executive padded seats on the halfway line.

There are various ways to get to the stadium but the most simple is by train. Simply head to Bradford Foster Square, however, Bradford Interchange is also just a short walk away, so either train station is close enough for visiting fans to aim for. The stadium is also easily reached by car, take the M62 exit and take the M606 to Bradford. At the end of the motorway, keep right and take the Ring Road East. From this point you can follow the signs with a white football on.