Wycombe Wanderers have played their home games at Adams Park since 1990. Adams Park has a total capacity of 10,000. The best thing about the stadium is that there are no pillars that block spectator’s views. The away fans can be found in the Dreams Stand which is located behind one of the goals. This like all stands are all seats, the other all-seater stands are the Bucks New University Stand and the Frank Adams Stand. The only standing stand is the Valley terrace; this is located behind the opposite goal to the away fans. 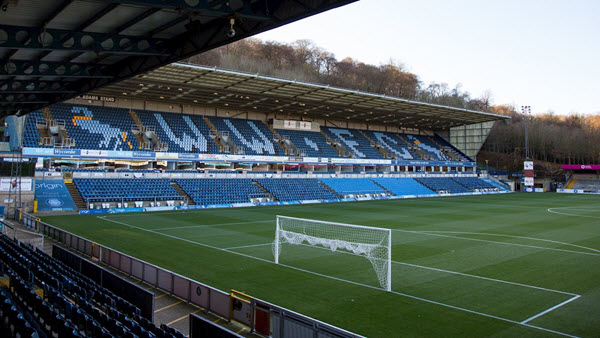 Frank Adams was a cult hero among Wycombe fans; this was down to his donations in helping the club reinvent their previous home at Loakes Park. He now has a stand named after him for his long-term commitment to the club. The stand is large and two-tiered and it is complete with corporate boxes at the back on the rows. The TV is located in between the Dreams Stand and the Main Stand.

The Dreams Stand plays host to the away supporters and the stand can host around 2,000 travelling fans and they have a great view of the action from behind one of the goals. On occasions, they open up an extra 800 seats if the opposing following support would demand it, this would see the space in the Bucks New University Stand become away territory. The refreshments and facilities are exactly what you would expect from a League One club.

How To Get To Adams Park Stadium

There is in car parking space at the stadium with £5 the price if you would prefer to park at the stadium rather than on an industrial estate, for the latter you should expect to pay around £3.

The nearest station to Adams Park is High Wycombe which is around 3 miles from the ground and will take around 30 minutes to walk. These trains run from Birmingham Snow Hill to London Marylebone. The easiest route to the stadium when arriving on the train is by getting a taxi; these are situated outside the station and are lots outside the station on match-day due to the demand.

Ticket prices are dependent on which stand you would like to sit in, with the Frank Adams Stand being the most expensive. Adults should expect to pay £22 for a match-day ticket, while over 60’s will pay £19, under 26’s pay £17 and under 13’s go for free. All away fans under the age of 13 can also attend matches free of charge, with adults and over 60’s also paying the same price as the Frank Adams Stand for a ticket. The cheapest stand is the Bucks University Terrace, where adults will pay £16 for a ticket, while the over 60’s will pay £14 to experience match-day.

There are also a few hospitality options for match-day. The Honours Lounge is the most affordable where you will receive a pre-match Q&A, a three-course meal and match-day programmes. This option ranges from £35 to £60. There is also the opportunity to rent an executive box for the day.

Here, you can watch the match from a fully-fitted and furnished suite with a bar. You will receive 12 match tickets for the game and have your own dedicated box runner, you will also have a one-course meal to enjoy pre-match. This package is a little more expensive and ranges from £800 to £1,295 depending on the fixture.