General Info
Ashton Gate in Bristol is home to both Bristol City Football Club and Bristol Rugby and sits just south of the River Avon. The stadium was originally the home of Bedminster FC who merged in 1900 with Bristol South End, previously located at St John’s Lane, with the merged side eventually moving here in 1904. Bristol Rugby permanently moved into Ashton Gate in 2014 and so far the groundshare is working well.

The stadium has hosted two England under-21 games, both of them friendlies, with a match against Romania in 2007 especially memorable as the ground attracted over 18,000 people for the fixture. 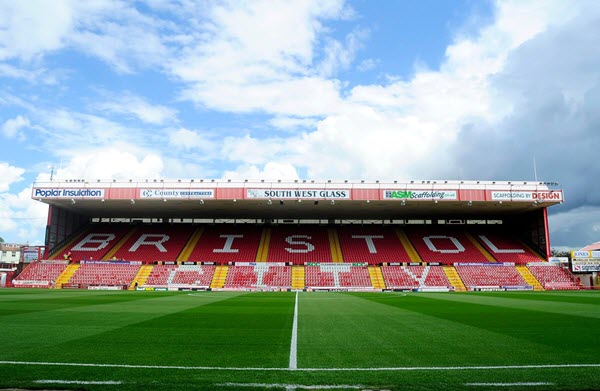 The Robins took the chance to install undersoil heating during their recent redevelopments and laid a pitch consisting of both synthetic fibres and natural grass to protect the playing surface from bad weather and a 23-game home Championship season as well as rugby games. As is standard now; the pitch dimensions are 105 metres by 69 metres.

Capacity
Following redevelopments which took place before the 2016/17 season, Ashton Gate can now host 27,000 on matchdays and is unlikely to change in the near future.

Stands
The Williams Stand runs the length of the field at Ashton Gate and houses the corporate hospitality guests as well as the director’s box. Opposite is the Dolman Stand with the Wedlock Stand sitting behind one of the goals with its corner joining the Williams Stand lower level. At the other end is the Atyeo Stand, the corner of which houses the club shop.

Away Fans At Ashton Gate
Visiting supporters at Ashton Gate are located in the Atyeo Stand which, having only been in existence since 1994, is a relatively modern structure offering unrestricted views of the action. Just 1,100 away fans are usually permitted entry into this section which is relatively low, or at least would be should the club achieve promotion to the Premier League.

Ticket Prices
For home Championship matches, Bristol City fans can pay anywhere from £21 in the Family Area to £31 in the Lansdown Stand for ‘Silver’ matches, or from £26 to £36 for ‘Gold’ games for an adult. Concessions for juniors, pensioners and the disabled exist in most areas.

Hospitality
Labelled as being for those serious about sport, Bristol City’s corporate packages are bundled as Platinum, Diamond and Gold Options with prices to suit most people.

Guests in the Heineken Lounge can pay £75 per person, per game plus VAT while those in the Executive Boxes are looking at a bill of £1,800 plus VAT for 12 guests.

How To Get To Ashton Gate
Ashton Gate is located on the outskirts of Bristol to the south west, only around two miles from the centre of the city and from Temple Meads train station from which a shuttle bus can be used on matchdays to get to the stadium.

Future Developments
After a failed bid to build a new ground at Ashton Vale, Bristol City went ahead with a redevelopment of Ashton Gate which brought capacity up to 27,000 for the start of the 2016/17 season. Following this, there are no plans to further redevelop the ground as yet.