General Info
Completed in 2009; the Cardiff City Stadium was opened on the site of the old Cardiff Athletics Stadium to replace Ninian Park as the home of Cardiff City FC. Some expansion to the original construction took place in 2014 taking the capacity up to over 33,000 and now hosts solely football having once also been home to rugby union side the Cardiff Blues in 2011/12.

The Bluebirds played their first match here on July 22, 2009 when they hosted Celtic in a friendly before kicking off their inaugural competitive season at the ground. 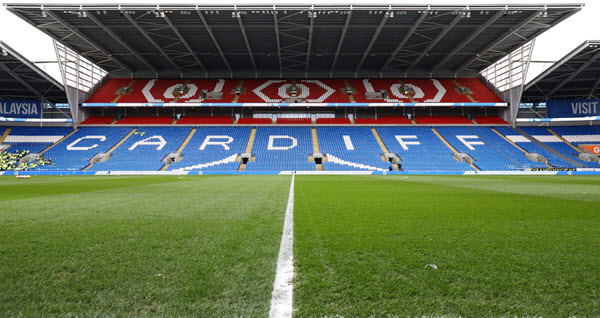 The playing surface is a slightly tight 100 metres by 68 metres and is made up of both synthetic fibres and natural grass. Undersoil heating is utilised to ensure that games are not called off due to bad weather alone.

Capacity
Just under 33,300 people can fit into the Cardiff City Stadium but due to safety concerns and other matters, this capacity is rarely reached.

Stands
The biggest stand at Cardiff is the Ninian Stand – this is the one you’ll see on most camera angles with the top tier having red seats and the bottom having blue. Opposite is the Grandstand and behind each goal sits the Grange Stand and Canton Stand. All four corners at the lower level are filled in to make a bowl.

Away Fans At The Cardiff City Stadium
Opposition supporters at Cardiff are housed in the corner of the ground between the Grange and Ninian Stands with a low-ish allocation of around 1,800 for most league games.

Visiting fans have often reported an unfortunate and long past its time throwback to the days of hooliganism with rows of empty seats and a police presence keeping home and away fans apart, though they usually compliment the strong atmosphere around the ground.

Given that it’s a modern stadium there is no surprise that seats are described as comfortable, the views are excellent and the concourses well-stocked and spacious.

Ticket Prices
Matchday prices are categorised at Cardiff into Gold, Silver and Bronze games. Single adult tickets for Bronze games are £15 – £32, for Silver they are £15 – £33 and for Gold £15 – £34 though of course concessions for the elderly, children and disabled supporters are available.

Hospitality
The stadium has various lounges and boxes as well as sponsorship opportunities for hospitality guests. Typical prices for the Foster’s Club are £49 – £69 per person, per game plus VAT. In the Sony Suite they are £59 – £79 and in the Captain’s Lounge £79 – £99.

A typical package for guests includes admission to the lounge 2½ hours before the game and 1½ hours after, executive seating in the stadium, a meal, a hostess and easy access to in-stadium betting.

Although buses are available, most fans get to the stadium by train. Trains from London Paddington, Birmingham and other main stations in the UK arrive into Cardiff Central. From there, an 8-minute train journey to Ninian Park and then a 5-minute walk will get you to the stadium.

Future Developments
Due to a lack of demand from fans, there are no current plans to redevelop or expand the Cardiff City Stadium substantially in the near future.