General Info
Surprisingly to most, Leeds United were only formed in 1919 and Elland Road has been the home of The Whites ever since then.  Back in its peak the stadium could host well over 50,000 and set a record attendance of 57,892 in the FA Cup against Sunderland back in 1967. 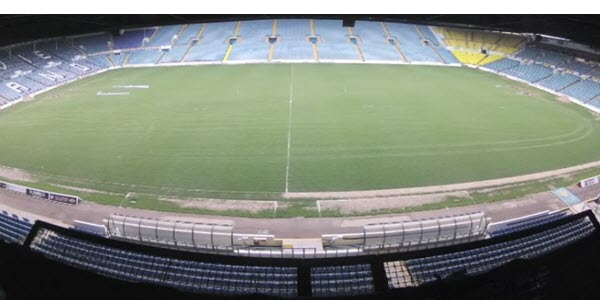 As an all-seater venue following the Taylor Report however, the record stands at 40,287 for a top flight league game against Newcastle United in December 2001.  Despite the changes though, the stadium remains the 13th largest football stadium in England and the fourth largest outside of the Premier League currently.

The playing surface is a mix of natural grass and astroturf, while it measures a bang on standard 105 metres by 68 metres.  Undersoil heating is deployed in the case of cold weather to ensure games can go ahead.

Capacity
37,900 people are seated within Elland Road these days though in the past crowds were much larger.  Rarely is capacity reached now since the club’s extended stay outside of the Premier League.

Stands
Elland Road is an older stadium, though the corners are filled in between the East Stand and the John Charles West Stand running the length of the pitch as well as the North and South Stands behind each goal.

Away Fans At Elland Road
Visiting supporters at Elland Road are housed in the John Charles Stand, a two-tier structure featuring around a 3,000-strong allocation of away fans.

Ticket Prices
Matchday tickets around Elland Road are staggered in price based which part of the ground you sit and what the level of opposition is.  The cheapest Category B game tickets are £26 while for Category A they are £29 and £34 for Category A*.

The most expensive are for Category A* games at £44 in the East Stand but are slightly cheaper at £39 for Category A and £37 for Category B.  Concessions are of course in place for juniors and older supporters.

Hospitality
Many packages are available at Elland Road for those wishing to entertain guests or simply watch the football in style.

The Gary Speed Suite has a seasonal price of £1195 per person plus VAT and is now an American style buffet restaurant.  This equates to only £52 per game (plus VAT) and is probably among the better value packages around in the larger clubs.

An Executive Box package comes with an inclusive drinks allowance of up to £100 plus VAT per box, per game and all packages come with excellent views of the action from comfortable seats outside the box itself.

How To Get To Elland Road
Leeds United’s home stands in the south-west of the city around two miles from Leeds station and the city centre.  Walking from the station to the ground will take around 40 minutes, however many buses serve the area with the 51 and 53 lines running regularly from Kirkgate Market.

Elland Road lies close to the M1, M62 and M621 motorway intersections and so is easy to get to by road.  Once on the M621, take junction 1 and the stadium is signposted immediately.

Future Developments
Now that owner Andrea Radrizzani has bought the stadium back from private owners at a cost of £20million, plans are afoot to modernise Elland Road.

Radrizzani plans to relocate the club’s training centre from Thorp Arch to near the stadium, while a planning application as also been submitted asking permission to hang horizontal and vertical banners proposing to include details of past and present players.

As of yet it’s unclear as to how much redevelopment of the actual stands and seating will take place.