The Stadium of Light was opened in 1997 to replace Sunderland’s former Roker Park ground at a cost of £24million. At that time the Rokerites became the Black Cats and have played their football here ever since. 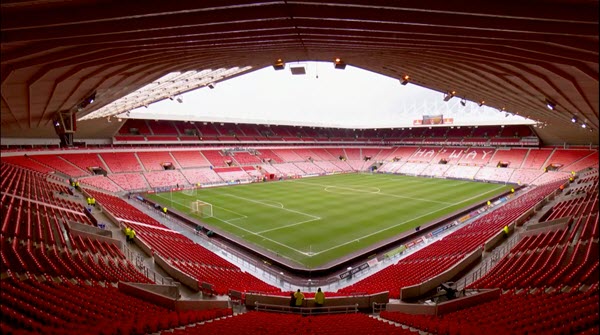 As well as Sunderland home games the stadium is used regularly for major music concerts with the record attendance for these being 54,259 (Rihanna, 2013).
The playing surface at Sunderland is all natural grass and has the benefit of undersoil heating to aid growth and ensure games are not called off due to a frozen pitch. The bang on standard measurements of 105 metres by 68 metres are used for the pitch at the Stadium of Light.

Capacity
For football games, 48,700 people can fit into the stadium and for now this will not be extended.

Stands
The stands are basically split into North, South, East and West with the North upper tier featuring away fans and being linked to the West and the upper Premier Enclosure by the north-west corner. The North and West Stands are the biggest in the stadium with the other two being single tiered.

Away Fans At The Stadium Of Light
Visiting fans at the Stadium of Light are usually situated in the upper section of the North Stand, a change from years gone by when they were housed at the opposite end of the ground. The typical allocation for league games is 3,000 but this can be up to 9,000 for cup games.

The very highest seats can suffer from restricted views with negative feedback having been drawn from some fans, though the atmosphere is good when the ground is full but sadly those days seem to be gone for now.

Ticket Prices
Single adult ticket prices for a typical Championship match at Sunderland are £25 – £30 with premium seating offered up at £50. Given the way the club have fallen, we can’t help feeling this pricing should have been reviewed. Heavy discounts are of course on offer for senior supports, junior fans and the disabled.

Hospitality
Packages are offered in various parts of the ground, the James Herriot Suite, Riverview Brasserie, Exective Boxes, Montgomery Suite, Quinn’s Sports Bar and Black Cats Bar all options. Those wishing to book to watch the game in style should contact the club directly for seasonal or match-by-match prices.

How To Get To The Stadium Of Light
The main train station in Sunderland is served directly by Middlesbrough and Newcastle with the walk from there just about 20 minutes to the stadium. The more common way to access the club though is by Metro, the stadium being equidistant from both St Peters station and Stadium of Light station. The walk is only around 10 minutes in each direction.

Buses from the city centre serve the stadium area too while drivers can take the A19, turning off onto the A1231 towards Sunderland and then looking out for Stadium of Light signs on the road.

Future Developments
Most (former) Premier League clubs had plans in place to extend and modernise their stadia but in Sunderland’s case all plans are on the backburner with crowds dwindling.
Despite a large and vociferous overall support, gates are down massively since the club’s relegation from the top division in 2017 and with League One looking a real possibility and crippling debts hanging over the club it will be a long, long time before we see any redevelopment of Sunderland taking place.