General Info
Recognised by many as the oldest continuously used football stadium in the world, Deepdale has been the home of Preston North End since 1878.
As the crowds began to arrive, terraces began to form in the 1890’s and by 1900 over 10,000 people were attending the Lilywhites’ games and more expansion was necessary – the Spion Kop was built and the West Paddock was extended to meet it. 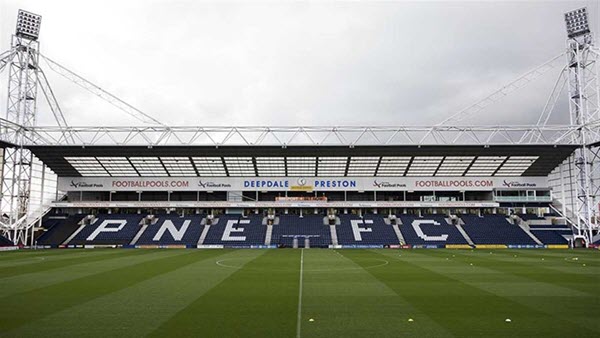 Preston laid a plastic pitch in 1986 and were one of four teams along with Luton Town, Oldham Athletic and QPR to utilise such a surface for commercial gain and to protect against weather, but by the time the fans eventually got their way and the pitch was ripped up it was the last of its kind in use in 1994.

The playing area at Preston is a standard size at 101 metres by 69 metres and is made up of natural grass. While that sort of traditional is admirable, crucially Preston do not have undersoil heating and so growing the grass and keeping fixtures on in particularly cold weather can be a challenge.

Capacity
Just over 23,400 people can attend Preston North End home games and do so in a structure which facilitates noise.

Stands
To the east is the Invincibles Pavilion Stand which runs the length of the field and stands opposite the Sir Tom Finney Stand. The Bill Shankly Kop, named after the famous Liverpool manager and Preston player, is in the north while behind the opposite goal is the Alan Kelly Stand.

Away Fans At Deepdale
Away fans at Deepdale are generally housed in the North Stand, known as the Bill Shankly Kop, with half of the stand (around 3,000 seats) kept for visiting supporters.

The feedback from Deepdale is generally good with the single tier structures ensuring that noise levels are high and the atmosphere competitive throughout the game.

Ticket Prices
Single adult prices at Deepdale for a Championship match range from £24 in the Family Area to £30 in Premium sections. Heavy discounts are offered for Seniors (65 and over), Full-Time Students (22-24) and under-21’s. Under-11’s in fact are charged £1 – £2 for each game, a terrific gesture from the club.

Hospitality
Corporate guests are welcomed into the Guild Lounge, Sir Tom Finney Lounge, Greats’ Room, Invincibles Lounge and the Executive Boxes with prices ranging anywhere from £65 per game plus VAT for an adult, to £995 for 12 guests or £18,000 for the season.

How To Get To Deepdale
Just a mile north east of the centre of Preston is Deepdale Stadium, only 1½ miles by foot and a 30-minute walk from the main train station in the city. Bus routes 5, 6 and 19 run from the city centre towards Deepdale and take only around five minutes.

Trains from Liverpool Lime Street, London Euston and Manchester Piccadilly connect directly with Preston with the journey from the main stations in the north west taking only around 45-60 minutes.

Future Developments
With the plans to redevelop Deepdale now complete and the capacity up to 23,000 there are no current plans to further modernise, extend or redevelop the stadium.