Scunthorpe United completed their moved to Glanford Park in 1988 this in turn made Glanford Park the first new football league ground to be built following the Second World War.

The most passionate Scunthorpe fans are generally located standing behind the goal opposite the away fans as this is the only stand in the whole stadium that has terracing. The side stands that cover the wide areas are most obstructed by the pillars but some of the areas allow you to get a fully viewable position to watch the game. All 4 corners are filled which helps generate atmosphere. 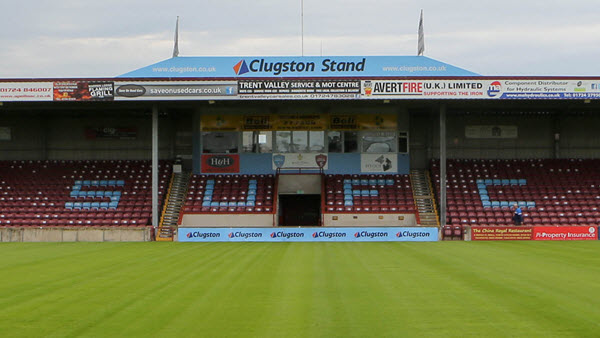 Most modern stadiums now have all stands of the same width and height and Glanford Park is no different, it makes for a very interesting visual. There are no areas in the stadium that let the noise out as it is fully enclosed, however the corners are not used to fill spectators. The only downside of the stadium is the amount of pillars that block the views. There is also an electronic scoreboard on the South Stand roof.

You will find up to 1,650 away fans located in the South Stand behind the goal. Again, there are a few supporting pillars that can obstruct views but generally you can see the entire game for most positions in the stand. Because of all the corners being enclosed, this cute little stadium can really get an atmosphere going. The facilities are also adequate with food and drinks also at a reasonable price.

How To Get To Glanford Park stadium

As the stadium is in the middle of a residential area full of houses there is more than enough space but the best place to park would be in the big stadium car park. You do need to get to the game in good time for this and it will cost you £3 for the privilege but you get away very quickly after the game and you avoid all the long queues.

The closest train stop to the stadium is the station in the town centre of Scunthorpe. It is around two miles and 15 minutes walk away from the stadium so the best idea would be to get a taxi as there are no shuttle busses on offer.

The Club have recently submitted plans to the Local Authority to redevelop Glanford Park with a new 11,000 capacity ground. The Club will continue to play there whilst the works are undertaken as they will work on one stand at a time, meaning they will not move onto working on a new stand until the work on the previous one is complete.

It has been widely reported that once planning permission is given, the first stand that will be demolished and rebuilt would be the Main Stand. The general plans also include full refurbished corporate facilities as well as some housing apartments in the Glanford Park site.