General Info
The famous Hillsborough Stadium in Sheffield has been home to Sheffield Wednesday since opening in 1899. Although also hosting internationals during World Cup 1966 and Euro 96, Hillsborough is known best as the home of the Owls. 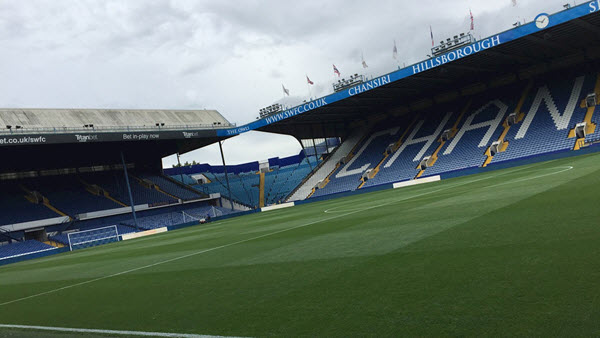 Undersoil heating is deployed beneath part synthetic pitch, the playing area of which measures 106 metres by 69 metres.

Capacity
Currently 34,800 fans are permitted entry as a maximum on safety grounds, though even as an all-seater the ground is in theory capable of hosting 39,700 people.

Stands
Simply put; Hillsborough is made up of the North, South East and West Stands though the West is also known as the Leppings Lane End and the East as the Kop.

Away Fans At Hillsborough
The West Stand of Hillsborough tends to be the temporary home of visiting supporters, known now as the Leppings Lane End, a poignant part of the stadium for reasons football fans will know all too well.

The standard allocation in here is around 3,700 which is fairly generous and occupies the upper-tier, though for certain cup games are derbies the lower tier can be used by away fans making the total allocation around 6,000.

The atmosphere tends to be good and it’s nice to visit a famous stadium however the negatives outweigh these factors, namely the old structure having support beams which obstruct views of the game and the concourse being less than inviting with its steel mesh food and drink hatches.

Ticket Prices
Sheffield Wednesday’s matchday ticket pricing is more staggered than with other Championship clubs. Not only are tickets priced differently in three parts of the ground; Kop, South Stand, North Stand & Grandstand, but also their tiered pricing goes all the way from Category A games right down to Category G.

Category G-A in the Kop then for a single adult match ticket is £20 – £42. In the North and Grandstand this is £20 – £45 and in the South Stand £20 – £49. This means an increase of up to 145% for the same seat depending on the level of opposition which seems a harsh pricing structure for a club a long time out of the Premier League.

Hospitality
Various executive boxes and lounges are available to book seats in around the stadium with packages offering the best food and drink along with the best seats in the house. A hostess is on hand to tend to your needs and half-time refreshments and a bar are offered to make sure you watch the football in style.

Those interested in hospitality at Sheffield Wednesday should contact the club directly or download a brochure to find out which package will suit and what the final price will be.

How To Get To Hillsborough
Hillsborough sits in the north-west of Sheffield and unusually for a football ground, the train is not the best way to reach it. The main train station in Sheffield is a good 3½ mile drive away so walking is not an option for most fans, though the Supertram can be caught at various points in the city.

Taking the tram on the yellow line in the direction of Middlewood, fans can jump off at Leppings Lane before facing a walk of just a few minutes to the stadium.

Many buses serve the area while drivers should head north of Sheffield on the A61 where the stadium will become visible on the left hand side.

Future Developments
There are no current plans to modernise, redevelop or extend Hillsborough and in fact back in April 2017 the club were forced to reduce the capacity of the stadium from 39,700 to 34,800 on safety grounds.