The home of Plymouth Argyle has possibly been transformed more than any other stadium in the UK over the past 10 years. The biggest change of the lot is that it is now an all-seater stadium. They started from scratch, demolishing three of the stands and then rebuilt them in 2001. 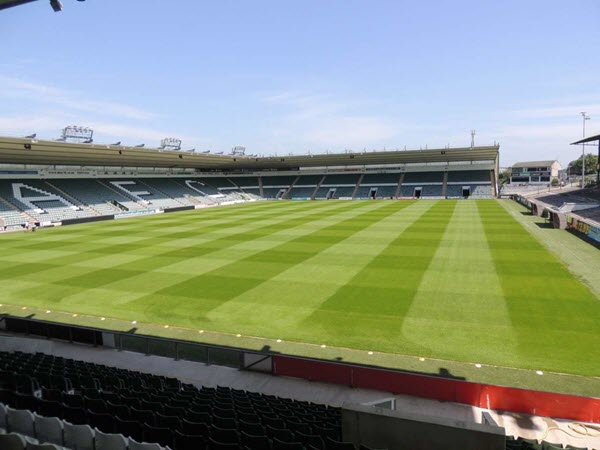 The only original part of the whole stadium is now the Grand Stand; however the terracing at the front of this was also replaced six years later in 2007. There are no bad seats in this stadium and when the final work is done of the Grand Stand, it will be one of the best places to watch football in the football league.

The Grand Stand redevelopment is taking a lot of investment and time, unfortunately for fans they will not be able to sit in this stand for the whole of the current season with the changing of the roof the biggest job being undertaken by the club.

That means that for this season the stadium will only have three stands open for the home matches. All three of these stands were constructed through out the 2001/02 season and they all look modern and set a high standard for the work on the Grand Stand. All the current stands- minus the Grand Stand are the same height and width as each other.

All of the seats are covered, there is a trendy part of the back of the stadium where there is an open space to allow light in. The corners are also filled with more seats meaning that the stadium is completely enclosed making for a much better atmosphere.

Away fans can be found in the Barn Park end where there is a capacity of 2,000 travelling fans that be accounted for. It is often said that it is more than likely that the club will only ever sell 1,500 tickets to travelling supporters however.

How To Get To The Home Park Stadium

Furthermore, there is a car park at the stadium and it is pretty big. You should arrive pretty early though as the first people in are also the first people out. There is a lot of street parking available but none of which is within ten minutes of the stadium, so if this is your preferred option you should expect a walk.

The nearest station for trains is located at Plymouth station. The station is about two miles away from the ground and takes approximately 20 minutes by foot. Once you have exited the train station, simply follow the signs for the stadium and you will find it with no problems. Worst case scenario, just follow the crowds on match-day as the train is the preferred option for many fans.

There is no difference in price depending on which stand you would like to sit in. All tickets for adults are valued at £21, while over 65’s will pay £16 and under 18’s will pay £8.

There is more exciting times ahead for club as they work on completing the expansion of the Grand Stand and the facilities that are in there. This includes a new roof and a new lower terrace for fans. There will also be new changing rooms for the players with the capacity of Home Park likely to rise to around 18,600.