Information about The Memorial Stadium

The Memorial Stadium or its old name Memorial Ground (which it is still commonly referred to as is the home of Bristol Rovers FC.) It is capable of accommodating 11,916 fans per match including 3,000 seats; the main stand has came in for a lot of criticism from fans of away teams, comparing the atmosphere to a match of cricket with the stand very unusual and not normally seen as a football stand. 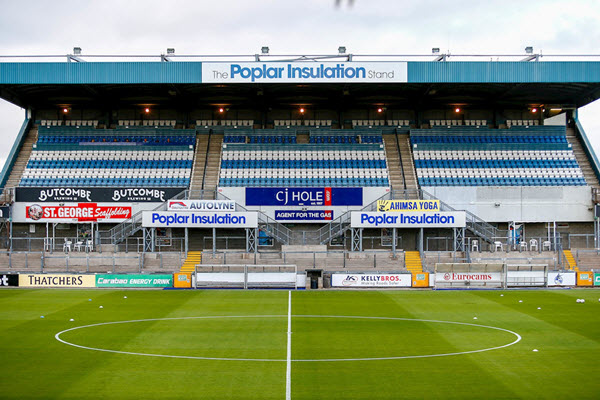 The land that the stadium is based on was previously used for public entertainment purposes as far back as 1891 when Colonel William “Buffalo Bill” Cody held a Wild West Show there between 28th September and 3rd October. Less than two years later, the first sporting fixture took place with Clifton RFC playing a game of Rugby here during the start of the 1893 season.

The Pirates chairmen converted into allotments during the First World War, the land officially became known as the Memorial Ground in 1921 when Bristol Rugby Club constructed the first basic facilities. The wooden stands were eventually built over the course of the 20th century, with the West Stand – the only remaining original feature demolished and replaced in 1995.

The ground has been occupied by Rovers ever since an agreement to ground share was made with Bristol rugby in 1996. They however, was given planning permission to build a brand new stadium with a capacity of 18,500 but any chance of that happening has been delayed.

The record attendance was set in a 2008 FA Cup Sixth Round match-up against West Bromwich Albion. The tie attracted over 12,000 fans to the Memorial Ground, unfortunately Bristol couldn’t win the game and exited the FA Cup in front of their massive home support.

Memorial Stadium is comprised of four distinct stands: North, East, South and West, making it one of the only clubs in England not to have any distinctly named stands. The South Stand was originally erected as a temporary stand, to fill the previously empty end. It has been open for over three seasons now but it still doesn’t give fans a football feel when they walk into the stadium.

Away Fans At The Memorial Stadium

Away fans are located within the south-east corner of the stadium split between the East Stand which terraced, and the south stand which is fully-seated. Away fans typically get a share of around 1,000 tickets but because of the nature of the seating that the ground isn’t the best for atmosphere, it generally feels less than that.

Tickets to see action at the Memorial Stadium can be purchased in advance online and at the club shop for a £2 early-bird discount. If you are buying the tickets on the day, adult’s tickets will begin from £18 but, West Stand and the East Stands both cost more.

You can cut the journey by foot by taking the train to Montpelier Station. This takes the travel time down to a more manageable 1.6 miles. You save yourself half the walking time by getting the train initially with the journey expected to take around 30 minutes all together.

Plans for a new stadium were resurrected in September 2012; however once again The Pirates look set to sail on tempestuous seas with an ongoing legal dispute with Sainsbury’s regarding the purchasing of the land at Memorial Stadium. Since this problem, all plans for expanding the stadium have been put on an indefinite pause and this shows no sign of changing almost seven years later.