General Info
Having played at Calder Vale in their very earliest days, Burnley have played at Turf Moor since 1883 and the stadium is one of the oldest and most iconic in England. No Premier League club has played at one ground longer than the Clarets have at Turf Moor.

Turf Moor’s history includes having once had the tunnel and dressing rooms behind the goal, one of the last remaining stadiums to have had such a layout. It originally consisted of only the pitch and a single grandstand before other structures were added just before the turn of the 20th century. 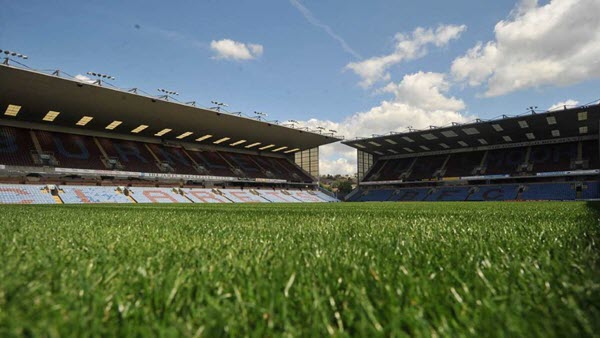 After World War II the ground was redeveloped with all four current stands being built. In the 90’s Turf Moor was further modernised and turned into an all-seater ground, as per government regulations.

Burnley have plumped like a lot of top league sides to have a pitch made up of both natural grass and synthetic fibres, woven through the surface. Standard undersoil heating is installed under a pitch which measures 105 metres by 68 metres.

Capacity
Turf Moor holds 21,400 people these days for Burnley home matches, something which is not likely to change in the near future.
Stands

Turf Moor, in a wonderfully old fashioned way, is made up of four very distinct stands with gaps in all the corners. Those stands are the Bob Lord Stand, the David Fishwick Stand, the James Hargreaves Stand and the Jimmy McIlroy Stand.

Away Fans At Turf Moor
Away fans heading to Turf Moor use the David Fishwick Stand which is placed on the western side of the ground behind the goal. A generous allocation of almost 4,000 is usually offered for Premier League games which almost fills this part of the stadium. More tickets can be allocated for FA Cup games.

The David Fishwick Stand has been remodelled inside in recent years due to many complaints from visiting supporters about the poor facilities on offer in the past. The club have addressed these concerns now.

Ticket Prices
There is a fairly rigid and not particularly expansive ticket pricing policy at Turf Moor, typically fans can get in from £30 – £40 for home league games although concessions may pay as little as £20 each.

Hospitality
Guests are welcomed into the Jimmy Adamson Suite, Hamburg Suite, the Brian Miller, the Vice Presidents or the 1882 Lounge for anything from £120+VAT per person to £250+VAT. Executive Lounges are also available for £25,000+VAT per season for 10 guests.

How To Get To Turf Moor
Turf Moor stands east of Burnley town centre, a 15-minute walk from both Manchester Road train station and Burnley Central station. Walking from the town centre takes only around 10 minutes to the stadium and a bus station is located even closer.

Drivers can get to the stadium by following the A646 or M65 motorway, following signs for Burnley town centre and then signs for Turf Moor.

Future Developments
Plans to redevelop Turf Moor were conceived as far back as 2007 with the goal being to increase the capacity and modernise all facilities, though this never came to pass and the club lost their Premier League status around that time.
Despite the club now appearing as an established top flight club however there are no plans at present for any redevelopment at Turf Moor.