General Info
Dean Court, as it is known without naming rights, was constructed and opened in 1910 for Boscombe FC with early developments including a 300-seat stand.
When the club became Bournemouth & Boscombe Athletic in 1923 crowds at Dean Court had grown to around 7,000 and thereafter a 3,700-seat stand was constructed on the site. As many as 28,000 attended an FA Cup match back in 1957 and so interest in the sport in this area had grown significantly.

In the intervening years the club bought up land around the ground but construction fell through due to lack of funds and by the mid-80’s the club saw a new low when less than 2,000 people were turning up for games. 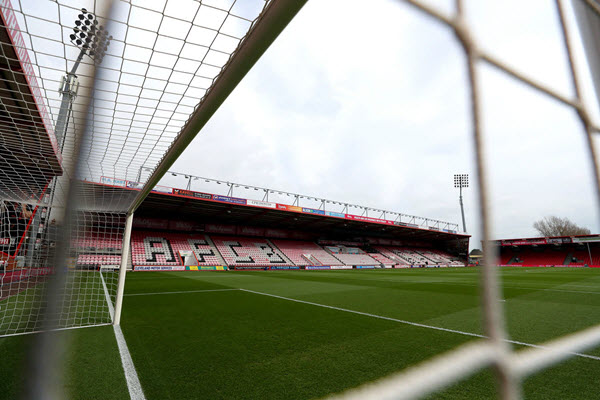 Dean Court was completely rebuilt in 2001 with the pitch rotated and opened as a three-sided stadium with a 9,600 capacity. A South Stand was eventually built to complete the shape of the ground and then in 2013 another 2,400 seat stand was built to bring the stadium up to its current capacity.

The Cherries’ pitch, surprisingly for some, is rather wide at 78 metres with a standard length of 105 metres. Undersoil heating was added in 2015 in readiness for the Premier League and the club employ a totally natural grass surface with no synthetic fibres added.

Capacity
Bournemouth’s home can take just under 11,500 fans making it the smallest stadium ever to host Premier League football just ahead of Oldham’s Boundary Park and Swindon’s County Ground.

Stands
The North, South, East and West Stands make up what is a very straightforward layout at the Vitality, though any new stadium in Kings Park is bound to be a modern bowl design.

Away Fans At The Vitality
Opposition supporters at the Vitality Stadium are hosted in a section of the East Stand. There is a close proximity between home and away fans given that the allocation of 1,500 away tickets is given in a stand which runs the length of the pitch.

Away fans generally greet this stadium with positive reviews given that its intimate nature means great views of the game from anywhere in what is a small away section.

Ticket Prices
A wide range of pricing is on offer at the Vitality with some younger members even entering for free. Wheelchair users get in for £5, concession tickets are between £19 and £40 while other adult prices range from £32 to £55 for Premier League fixtures.

Hospitality
Welcome drinks, three-course meals, a pre-match player interview, panoramic views and full-time refreshments are on offer in various lounges from £150 per person for some fixtures and £175 per person for others.

Supporters can walk from one of two stations upon arriving by train but both may take half an hour or so on foot. Drivers can use the A338 towards the town before heading in the direction of Boscombe. Follow Kings Park Drive and the stadium will appear.

Future Developments
Nothing can be done at the Vitality to increase the size and scope of facilities as it turns out, though the club have confirmed that they intend to build a new stadium nearby within Kings Park having announced in December 2016 they would eventually leave their current home.