General Info
Pride Park Stadium sits within Pride Park itself on the outskirts of Derby city centre. Derby County moved to the stadium upon its completion in 1997 having previously played at the Baseball Ground. As well as being the home of the Rams, Pride Park has hosted two international matches and was the venue of the 2009 Women’s FA Cup final.

Due to a sponsorship deal, the stadium was renamed as the iPro Stadium between 2013 and 2016 though given the cancellation of this contract the original name has been reinstated much to the delight of many Derby fans. 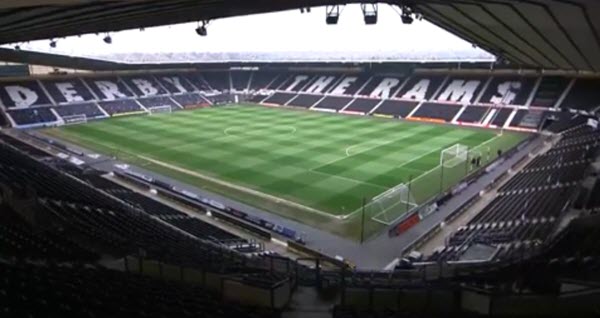 The Queen opened the new stadium on July 18th, 1997 and the first game was played there on August 4th – a 1-0 friendly defeat to Italian outfit Sampdora. Over 27,000 attended Derby’s first competitive match at the stadium, a 1-0 win against Barnsley.

Undersoil heating is deployed by Derby County beneath what is an all natural grass surface, something now uncommon among the top clubs in England. The playing area measures the standard 105 metres by 68 metres.

Capacity
The current capacity at Pride Park is 33,500 though this is rarely reached.

Stands
Pride Park is made up of the West Stand – the largest area on more than one tier and running along the length of the field, the East Stand opposite and the South and North Stands at either end of the pitch. The north east and south east corners are filled in on lower levels, while the south west corner is larger. The north west corner is equally large but contains mostly corporate guests.

Away Fans At Pride Park
With a standard allocation of around 2,700 tickets, away fans are housed in the corner of the East Stand and the South Stand. The stands are modern and offer unrestricted views of the action while the hospitality is generally greeted with favour by opposing supporters.

Ticket Prices
A typical adult single ticket for a Championship match at Derby County tends to be £15 – £33, though as always concessions are available all round the stadium for young fans and pensioners as well as disabled supporters receiving large discounts.

Packages include a buffet, complementary pre-match drinks, comfortable seating with a great view of the action, car parking and a matchday host.

How To Get To Pride Park
Pride Park Stadium is situated just over a mile from Derby’s city centre to the south east and is even closer to Derby train station. From the station the stadium is only a 15-minute walk away, though the walk from the city centre is around half an hour.

Shuttle buses run from the city centre on matchdays and rail remains the best way to reach the ground if coming to see a game although for non matchdays plenty of parking is available.

Future Developments
Not to be left behind by the dozens of clubs looking to modernise or expand, Derby County have tabled plans to extend Pride Park in order to house a new fan zone with bars and a food court. The extension would be to the East Stand and would be a two-storey development.