Coventry made the Ricoh Arena its home at the beginning of the 2005/06 season. Prior to this the club had played their home matches at Highfield Road, the move to the Ricoh ended a 106 year relationship with their previous home. The club required a newer and modern stadium, with better transport infrastructure, the decision to build a new ground was made as far back as 1997 by previous chairman Bryan Richardson. 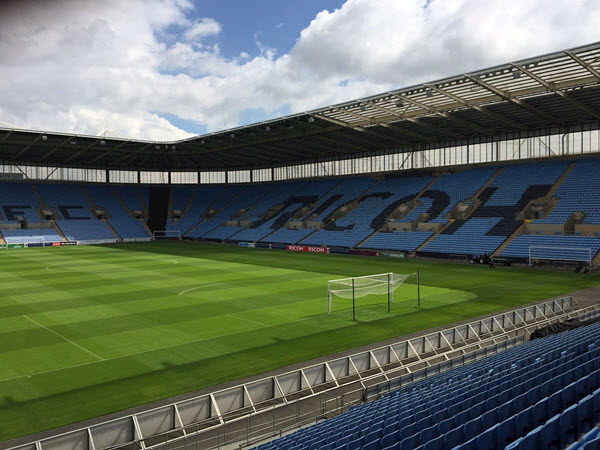 Planning permission was accepted during the mid-point of the 99-00 season, with the club hoping to move into their new stadium at the beginning of the 2000-01 season. Much to the dismay of the owners, the project was delayed by just under five years. To make matters worse, the club was relegated from the Premier League and found it harder and harder to find the financial means to build the stadium. In fact, by the time that the project began, the plans had been changed and instead of having a 45,000 capacity, it was announced that it would in fact have a maximum capacity of 32,500.

Reliant on England’s bid to host the 2006 Fifa World Cup, the amount of public funding decreased and combined with poor league standings it made sense to lower the capacity.
In 2006 the Ricoh stadium did however finally get a taste of international football as it played host to England playing Germany in an Under 21s Euro Championship match. Officially known as the Ricoh Arena after the Japanese electronics company signed a 10 year sponsorship.

Originally owned by Coventry City Council and the Higgs Charity before Wasps purchased it in October 2014, Coventry City was at one stage embroiled in a rent dispute with the operators Arena Coventry Limited. Relocating to Northampton’s Sixfields Stadium at the start of the 2013-2014 seasons, the club made a return to the Ricoh Arena the following season after intervention from the Football League.

The complex has an exhibition centre attached to its West side, resulting in a unique looking stand that gives more of a continental feel. The West side has a small tier of seats over-hanging the larger lower tier. A row of corporate boxes also run along the back of this section. Along the top of the stand is a large area of white panelling adorned with the logo of the stadium sponsors, which runs along the length of the stand and around the corners of either side of it.

Away Fans At Ricoh Arena Stadium

The corner of the West Stand is where you will find the away fans– typically in blocks six and seven. You can generally fit in around 3,000 fans in this area with the stand actually pretty steep- meaning there is a bit of a climb for fans to reach their seats. You would be forgiven for thinking that because of the steepness you would be closer to the action but this is not the case at the Ricoh. This does lead to some viewing problems, especially when the action is taking place at the other end.

Standard tickets to see Coventry at the Ricoh begin from £22, while concessions are £15 and junior tickets cost £11. There are also tickets available for the Family zone where tickets are cheaper with adult’s tickets costing £18 and concessions £13. Be aware all of these prices are early-bird prices with general prices being a little bit more expensive.

The stadium is not the easiest to reach with the train station being around four miles away from the stadium. However, on match days there is normally a bus transfer that operates to take fans from the station to the stadium and this is the most straightforward way to get there.