Southend’s home stadium is locating with the middle of a housing estate and because of that, it has many entrances into the ground in between many houses. Roots Hall stadium has a lot of supporting pillars, including the most recently constructed stand, the South Stand which has more pillars than any other stand in the stadium. Because of the amount of pillars in the stadium, if you are sitting near the back of the stand you will have a very restricted view on what you can see. This is also the case if you are sitting at the back on the upper tier as you will not see one of the goals. 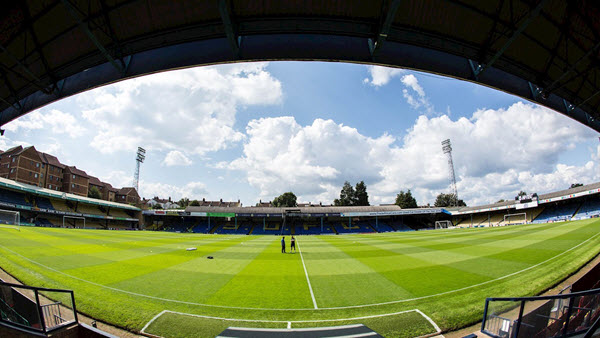 The South Stand was reopened in the summer of 1994, it replaced an open terrace and when it was unveiled it gave the whole stadium a new look and a much better look than previously. The upper tier hangs over the tier below it but it is all covered. There is a small clock on this stand that is dedicated the very popular ex-player, Frank Walton. Opposite this stand, you will find the North Stand which is also very similar to the West Stand. It is also single tiered and has a very old-fashioned look about it.

The East Stand is another single tiered stand and like the others, it is also well covered. There are also multiple executive boxes behind this stand with the main seats being directly behind the dugout. Here you will also see the players who are not featuring in the matchday squad as this is normally where they sit too.

How To Get To Roots Hall Stadium

There are parking areas at the ground nearest to the North Stand and will cost you £5 for one vehicle. However, because of where the stadium is, the best and easiest place to park would actually be on the streets surrounding the stadium as there are no permit holder sections. From here, you will be a maximum ten minutes away from the stadium.

The nearest station to the Roots Hall stadium is Prittlewell. The easiest way to get here is on the Liverpool Street to Southend Victoria Line. The services run every 20 minutes and take around an hour on match days. From the station, the ground is around 5 minutes.

There is no difference in ticket price with regards to the stand that you choose to sit in. Adults will be expected to pay £22 for a match-day ticket, while over 60’s will pay £15, under 16’s pay £10 and under 8’s will be charged £4.

The club has recently submitted plans to build a new 22,000 capacity stadium at Fossetts Farm, just behind the club’s training ground in Eastern Avenue. The scheme plans to feature a hotel, retail space, a cinema, plus indoor training pitches and residential accommodation. Work is likely to begin at the end of 2018.