General Info
Brighton and Hove Albion’s home stadium, only opened in the summer of 2011, has already been known by many names from the Falmer Stadium, the Community Stadium to now the American Express Community Stadium or the Amex Stadium for short. 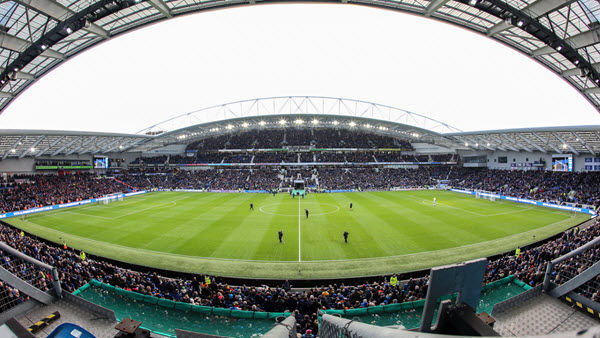 The new build, costing £93million, was essential for the future of the club who had not played at their old home at the Goldstone Ground for 14 years and instead had to groundshare in the intervening years. Brighton first of all had to move to Gillingham for two years before playing at the unsuitable Withdean Stadium, an athletics venue.

The Seagulls finally played their first competitive match in their new home when they beat Doncaster Rovers in August 2011 before an early attendance record was set in a League Cup tie the same season versus Liverpool – 21,897. The visit of the same team in the Premier League in late 2017 set the new record of 30,634, very close to capacity.

A purely natural grass surface makes up the playing area at the Amex Stadium with the pitch measuring a standard 105 metres by 69 metres. Undersoil heating means no games are called off simply for cold weather and facilities are right up to date.

The stadium was built in time to see Brighton and Hove Albion reach the top level of English football for the first time since 1983.

Capacity
Just under 31,000 people can be accommodated at the Amex Stadium with no plans in the short term to increase this any further given the reach of the club.

Away Fans At The Amex
Away supporters at Brighton watch from the south-east corner of the ground with a reasonably generous allocation of 3,300 tickets for Premier League games. Naturally away fans are not given the best part of the stadium, though views are generally excellent at the Amex anyway.

Padded seats are standard at Brighton, though most away fans stand when they can. There is an impressive array of refreshments on offer in the concourse area.

Ticket Prices
Matchday tickets at the Amex Stadium are graded depending on the level of opposition and categorised as A, B or C. The latter category was actually dropped in price between the Championship in 2016/17 and the Premier League in 2017/18, an unusually generous move for a modern football club.

Fans can enter the Amex from £25 per person for league games with concessions set at £20 though full information is given on the website shortly before each fixture.

Hospitality
Guests booking hospitality at the Amex are invited into HB’s Restaurant (£160 – £220 + VAT), the Goldstone Restaurant for the same price or in executive boxes from £2,250 per person + VAT.

How To Get To The Amex
The Amex is actually located in Falmer, north-east of Brighton around 5 miles from the town centre and pier. Drivers can get to the stadium from the A27 from both the east and west, the stadium being just off the main road.

Falmer train station is right beside the stadium with services running from Brighton regularly and taking only 10 minutes. Buses from the centre of Brighton to Falmer are again regular and serve the stadium.

Future Developments
There are no current plans to extend or redevelop the Community Stadium, despite the football club’s current Premier League status.