General Info about the Emirates

Arsenal’s Emirates Stadium is a four-tiered bowl which has a translucent polycarbonate roofing, though this does not cover any of the pitch. It is the third-largest football stadium in England after Wembley Stadium and Old Trafford, though rivals Tottenham Hotspur are opening their own 60,000-seater stadium in 2018.

Having been denied the opportunity to renovate and extend the Gunners’ old stadium, Highbury, relocation began in 2012 but work was delayed on the project until 2004. The stadium was completed in 2006 at a cost of almost £400million and the project also included turning the old Highbury Stadium area into luxury apartments. 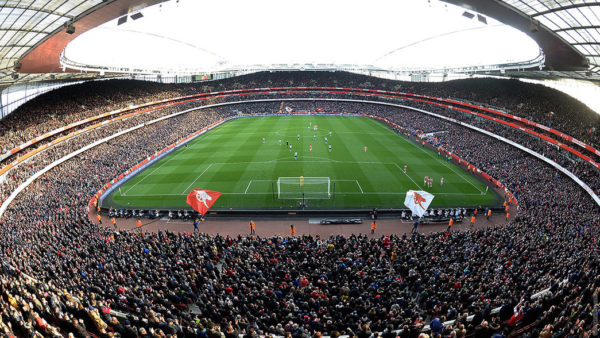 In what are fairly standard dimensions for a Premier League club, the Emirates Pitch is 105 metres by 68 metres and is made up of both natural grass and synthetic fibres. The club have a powerful undersoil heating system to ensure games cannot be called off because of cold weather alone.

The current capacity of the Emirates Stadium sits at just a shade under 60,000. Should the club get back to the level of being challengers in Europe, this is something which would need to be extended further.

Although the stadium is essentially a bowl, the ground is still thought as being made up of the Clock End and North Bank behind each goal with the East and West Stands running along the length of the pitch.

Away Fans At The Emirates

Visiting fans at the Emirates are located in the South East corner with a good view down near the corner flag. Opposing supporters are invited in from two hours before kick-off and typically receive an allocation of 3,000 tickets.

As always in the Premier League, different pricing policies are in place depending on the level of opposition at the Emirates however generally league game tickets can be purchased by non-members for anything from £19 to £97.

Hospitality packages for a typical Premier League match against good opposition at the Emirates will cost guests from £960 per person in Club Arsenal, £3,600 per pair for The Heritage and right up to £28,800 per 24 guests in the club’s Super Box Experience. Arsenal is known to be one of the most expensive for this sort of experience.

How To Get To The Emirates

To get to the Emirates via Tube or rail, King’s Cross is the main connection as well as a host of underground stations. Within a 15-minute walk from the Emirates are Arsenal, Finsbury Park, Highbury & Islington stations while Holloway Road and Drayton Park are either closed or are exit only on Arsenal home game days.

On match days the advice is not to drive to the Emirates, but if visitors do wish to go by car then simply leave the M1 motorway at junction 2 and get onto the A1. Follow signs for Central London until you see Holloway Road Tube Station.

Take a left after the station onto Hornsey Road and the stadium will appear a ¼ mile away. An Event Day Parking Scheme is in operation on match days and any cars parked will be towed away.

Given that the stadium is relatively new, no major expansions are planned but as far back as 2008 Arsenal’s season ticket waiting list was 40,000 strong. Expansion options include making the seats smaller, filling in any gaps around the arena or replacing the roof with a third level but these all look a long way off with Arsenal slipping off the pace somewhat on the pitch.