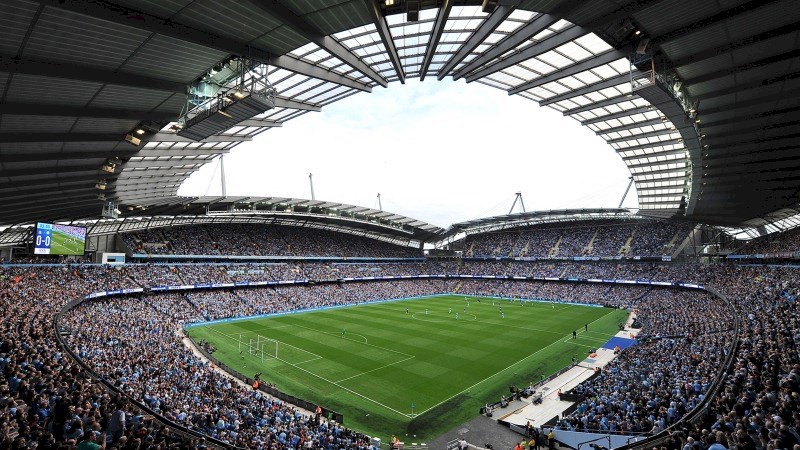 Having been converted to host the Citizens’ football games following their move from former ground Maine Road, the stadium was then known as Eastlands and originally hosted a maximum of 48,000 for Man City’s home games.

Having initially been built at a cost of £112million, the stadium has since gone under further reconstruction and now has a capacity of 55,000 for home games.

The pitch is made of up natural grass which is reinforced by an artificial fibre. To create the best possible surface, the roof of the Etihad was designed to maximise sunlight by utilising a ten-metre band of translucent polycarbonate, creating a sort of greenhouse effect to encourage growth.

Drainage and under-pitch heating were installed to provide optimum conditions for the grass as well as ensuring, as is standard these days in the Premier League, that simple frost and snow cannot lead to a postponement of matches. The pitch dimensions are a UEFA standard 105 metres by 68 metres.

Stands
The Etihad is made up essentially of four separate stands with the corners left without seating in the upper areas and with perforated walls to improve ventilation and airflow for the grass surface.

The four stands are the South Stand and the Family Stand at each goal end, with the East Stand and the Colin Bell Stand lining the length of the pitch and housing most of the hospitality guests and media.

Away Fans At The Etihad
Visiting supporters at Man City are typically located in three tiers on a side of the South Stand, usually with an allocation of around 3,000 for league games.

Ticket Prices
Season tickets can range from £299 in the South Stand up to £635. Under-18’s can buy a season ticket for as little as £99 in some parts of the ground. £30 – £55 general admission for Champions League games is fairly typical. Check the official website for info on specific games.

For example, hospitality tickets for a game against Swansea City were available from £169. For the visit of Chelsea however this changes to £369 and there are prices in between too.

Hospitality guests can choose from the Tunnel Club, the Sports Bars and various suites.

How To Get To The Etihad
The Etihad stands in the east of Manchester, approximately 1.5 miles from the centre of the city. The ground is a 30 minute walk from the city and is close to Piccadilly Station.

A Metrolink train is available from Piccadilly or Market Street in the city which can take supporters directly to the Etihad Campus, though many bus links also serve the area.

Those arriving by car are best served taking the M60 motorway which runs east from the city, taking junction 22 or 24. Once in and around the city simply follow signs for the Etihad Campus and the stadium cannot be missed.

Future Developments
After the third tier was added to the South Stand back in 2015 there have been long standing plans to do the same at the opposite end of the ground. When this is completed the capacity is expected to be above 61,000.