General Info
The King Power Stadium, previously known as the Walkers Stadium due to various naming rights, has been the home of Leicester City since they moved from old ground Filbert Street in 2002. It is the 20th largest football stadium in England, further confirming their Premier League status as a club.

The stadium was officially opened by Leicester City legend Gary Lineker in July 2002 with the first competitive match being played only a week later as the Foxes beat Watford 2-0 in front of over 31,000 fans. 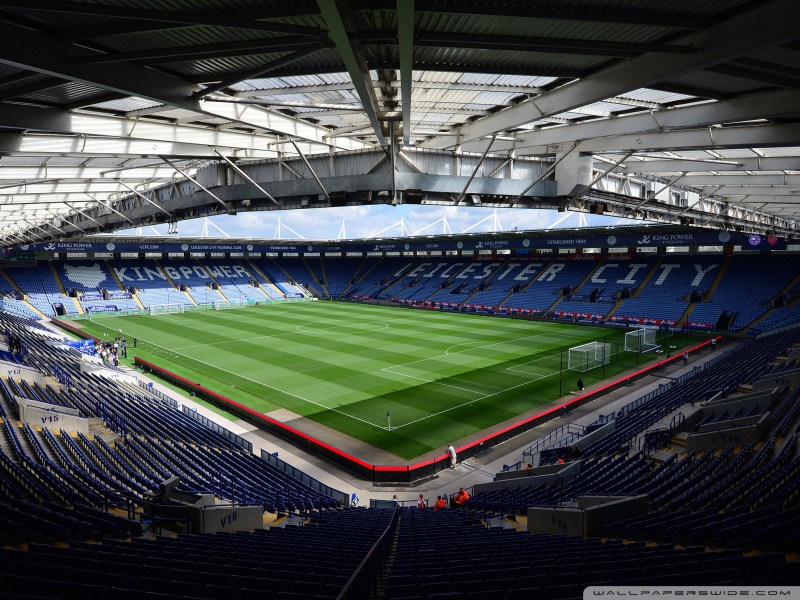 Leicester City finished the 2002/03 season by being promoted to the Premier League, losing only two home games at the then Walkers Stadium all season although the celebrations were marred by financial troubles, partly brought about by the building of this venue.

Leicester have opted for the now familiar mix of natural grass and synthetic fibres for the King Power playing surface, while a strong undersoil heating system wards off postponements for bad weather.

The pitch is 105 metres by 68 metres and until it was banned in 2017, often bore emblems and fantastic grass cutting designs by their head groundsman.

Capacity
The King Power holds 32,200 supporters for home matches these days but has room to expand.

Stands
The four main stands at the King Power each join up in a modern enclosed design with the stands named basically as per their location, i.e. the North, South, East and West Stands.

Away Fans At The King Power
Away fans at Leicester City are allocated usually in the north-east corner of the stadium and are given the league standard 3,000 tickets.

Feedback from away fans is generally good and tends to suggest that being congregated in this area means it fills well and creates good noise meaning banter back and forth between sets of fans is increased.

Ticket Prices
Despite having been Premier League Champions as recently as 2015/16 prices at the King Power are kept to a reasonable level. Home tickets for a typical Premier League match range from £26 in the Family Stand to £36 in the Kop (South Stand) and right up to £48 in the East Stand.

Hospitality
A typical package in the Legends Lounge for example would cost guests around £175 per match. These facilities include a four-course meal, teamsheet and matchday magazine, a club legend acting as matchday host, half-time and full-time refreshments and either a cash bar or pre-arranged all-inclusive bar.

How To Get To The King Power Stadium
Leicester’s stadium is located just over a mile south of the city centre and main train station, a mere 20-minute walk away and located near Leicester Tigers’ rugby stadium.

Future Developments
Architects working on behalf of the club have drawn up plans to expand the King Power to around 42,000. This would mean a second tier going onto the East Stand and it is believed the club have bought up the land behind the current East Stand to allow for the development should plans be approved.