General Info
Vicarage Road has been the home of Watford FC since opening in 1922 and after a few touch-ups is still going strong as a Premier League venue. The Sir Elton John Stand was opened in 2014 while extensions to other areas of the ground and the pitch itself continued throughout 2015 and 2016. 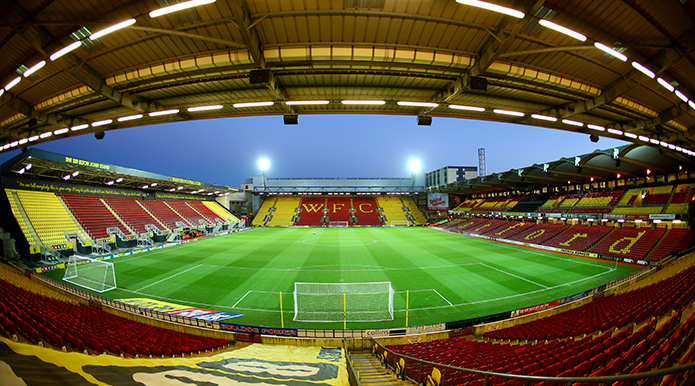 Before 1922 the club played their games at Cassio Road with Vicarage Road opening in time for Watford to play Millwall on August 30th. Wealdstone United also played their games here as did rugby union team Saracens before they moved to Allianz Park in 2013.

Although it perhaps isn’t apparent to neutral fans by watching on TV, Watford’s pitch is on the large side for a Premier League venue at 110 metres by 73 metres. Undersoil heating is employed and the surface is made up of both natural grass and synthetic fibres to keep the pitch in as good a condition as possible.

Capacity
21,500 can squeeze into Vicarage Road but the constant tweaking of facilities at the Hornets’ home ground means this can increase, albeit gradually and probably remaining dependant on the club’s top flight status.

Stands
As one of the older, more traditional English football grounds Vicarage Road has four distinct stands with obvious gaps in the corners. They are the Graham Taylor and Sir Elton John Stands which run along the length of the pitch with the Rockery Stand and the Vicarage Road Stand behind each goal.

Away Fans At Vicarage Road
Supporters visiting from elsewhere are housed in the Vicarage Road end of the stadium and are provided a very good view of the action.

Facilities are generally met with favour by away fans at Watford with the food and drink choice ample, though once again the issue of pricing is what concerns most with the away concourse proving a tad expensive.

Ticket Prices
Watford, despite the age of the stadium, the status of the team and their location, are one of the more expensive teams to watch in the Premier League with tickets at £65 and over quite common.

Hospitality
Watford offer hospitality in a range of suites and lounges at various parts of the ground. The TV Lounge, The View, The Gallery and the Sir Elton John Suite offer terrific views of the action and top class food and drink. Prices are available on request as the club don’t advertise them widely.

Those wishing to use the Tube can go from Baker Street to Watford Tube Station, though the journey takes 40 minutes and then there’s a further 20-minute walk to the stadium itself.

Drivers can use the M25 motorway and come off at either junction 19 or junction 20, then following the A41 for Watford before looking out for signs for Watford General Hospital. The stadium is close by, though driving to the stadium on matchdays is not recommended.

Future Developments
Back in 2016 Watford started working on plans to add a second tier to the Sir Elton John Stand, attempting to take the capacity of Vicarage Road to 30,000. Some work was done in 2015 and 2016 around the ground with more expected as each season goes by, though when the final 30,000 target capacity will be reached is unclear.